Never Sleep is the first story in The Chronicles of a Lady Detective series. This one is set in 1885, more than a decade before Concordia meets Penelope Hamilton in Dangerous and Unseemly. Here Penelope recounts her first case as a Pinkerton in her own right.

Readers will find a tale full of mysterious occurrences and “unladylike” action scenes…typical of a daring protagonist such as Miss Hamilton. 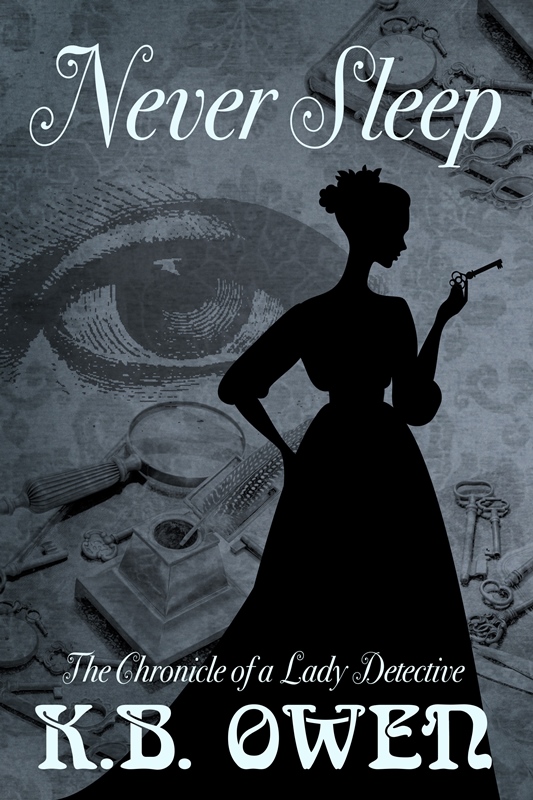 Although Penelope Hamilton Wynch doesn’t especially miss her estranged husband, she does yearn for the excitement of the old days, when they worked together on assignments from the Pinkerton Agency. So it is no surprise that, despite their irreconcilable differences, she finds herself agreeing to help him on a case once again. He needs her to infiltrate the household of H.A. Comstock, a wealthy industrial magnate who has been the victim of factory sabotage and an assassination attempt, just as the family is about to sponsor a cotillion for their debutante daughter.

As Pen works the case while dodging her husband’s attempts at reconciliation, she encounters another old flame who is looking more and more like the prime suspect and could reveal her true identity. Too bad the Pinkerton handbook doesn’t cover THAT, and she’s running out of time to stop the saboteur and would-be assassin before he strikes again.

NEVER SLEEP is the first adventure in the CHRONICLES OF A LADY DETECTIVE series featuring 1880s Pinkerton detective Penelope Hamilton.

“I’m a big fan of historical mysteries that feature lady detectives, and Penelope Hamilton was one of my favorite secondary characters from K.B. Owen’s Concordia Wells series. Penelope has a strong opinion on the world around her, and this book gave enough hints of an interesting past and a future full of problems that I’ll be waiting for the next novellas in the series.”     ~Marcy Kennedy, editor and suspense fiction author

“I really enjoyed this book. It packed a lot into a short novelette. I loved the main character – and will have to read the other books in the series. Here I go again – getting hooked on a series of books/novelettes. What fun!!!! A Pinkterton lady detective. Love it.”     ~nhrbookcrazy

Start the series with the 99-cent ebook! Click one of the links below:

…OR, subscribe to my newsletter for book release announcements and get your FREE e-copy of Never Sleep. It’s a win-win! (Your email is in good hands, I promise. I do not share or distribute anyone’s email, ever).