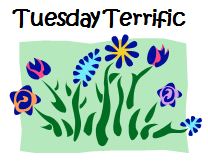 Welcome to Tuesday Terrific, where we celebrate getting over the Monday hump and picking up speed for the rest of the week.

We humans walk around this planet with a bit of a swagger, don’t you think?  After all, we’re the big-shot, top-of-the-food-chain, opposible-thumbed bi-pedals with more brain capacity than we actually use.

But there are times when we’re reminded that it’s not always easy at the top.  Some other critter is poised to topple us from that perch.   Stink bugs, crickets, rodents, racoons, bats, squirrels…they all want a piece of what we’ve got.  If they can’t get opposible thumbs, they’ll have the next best thing: food and shelter from the work of our hands.

Today’s post features the next installment of pesky critters: raccoons.  It’s a follow-up to an earlier post about the evil squirrel race.  Perhaps I should thank the big ol’ coon that tipped over our recycling bin last night to get at the peanut butter jar, and pooped in one of the flower pots.  I was having trouble coming up with an idea for today’s post, until he showed up.

Even if you live on an alien planet and never heard of raccoons, you’d find out plenty fast if you had a Facebook account.  (Yeah, I know, Zuckerberg hasn’t gotten Facebook’s tentacles out that far into the ether – yet).  Here’s a little interchange among neighbors on our street Sunday night.  You’ll notice we’re not actually outside talking; it’s via Facebook, which is where most interactions take place these days.  Some see that as a sad testament to modern civilization, but hey, it was raining cats and dogs (and coons, apparently, LOL), so I’m over it. 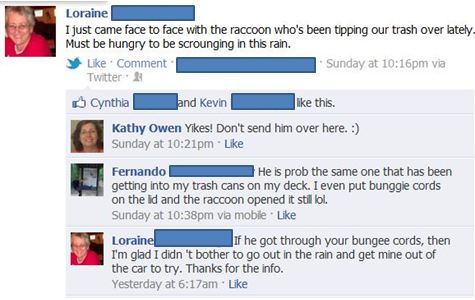 As you can see, the neighborhood raccoons are a force to be reckoned with.  Heck, I have trouble with bungee cords – always snapping them back on myself, ouch – but they are obviously no problem for these critters.

The raccoons in our area have grown in number and frequency of visits over the years, and I feel a disturbance in the Force.  Because it’s not just garbage cans and recycling bins that raccoons are after, no no.  They want the good stuff.  Once summer is here, what are they going to do to our raspberry shrubs, tomatoes, peppers, etc?  And what attics are they going to break into to give birth to their babies?

These critters have been enormously successful at adapting to the loss of their original wooded habitat.  Now they’re getting back at us.

How did this happen?  What evil genius is at work here?

Raccoons have certain traits that uniquely qualify them to wreak havoc with our habitat.  Allow me to elaborate, with evidence from actual Facebook friends who have encountered a raccoon and lived to tell the tale.

1. They are persistent.  But Julie Glover knows how to deal with the tenacious ones that keep coming to her backyard: 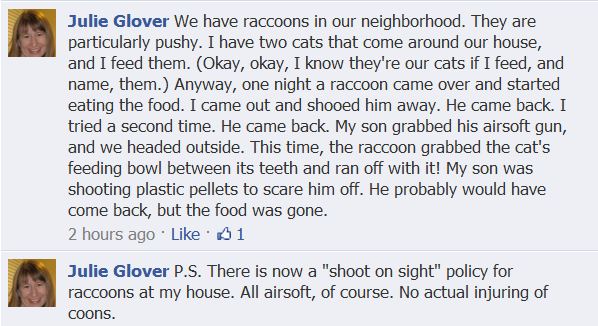 It doesn’t keep them from coming back, though, does it, Julie?  Even now, they are planning their next nightly raid, bwahaha.

2. They aren’t picky about what they eat, or where they raise their family.  Diane Capri had some unwelcome houseguests once:

Diane, I’d call them – well, this is a family-oriented blog, LOL.  Strictly PG.  I believe the technical term, though, is “kits.”

3. They are clever, have a great sense of smell, and nimble little paws.  And yes, they are really cute.  Stacy Green has a funny story about that:

LOL, Stacy!  You got guilted!  Oldest trick in the book. 🙂

4. They aren’t scared of us.  Oh, sure, they’ll go away when we come outside, but they don’t hurry.  They just sort of saunter, with that I’ll-be-back-later attitude.  Some folks have even kept them as pets, including Ellie Soderstrom:

I don’t know, Ellie, that eating-doughnuts-from-the-fridge story sounds like my teenagers, LOL.  We’d love to hear more sometime about having raccoons as pets!  Sort of an “if you can’t beat ’em, join ’em” attitude.

5. They all wear that bandit-mask, so you can’t i.d. the exact culprit in a line-up. 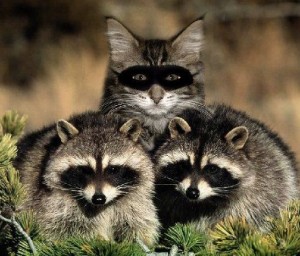 Which one is NOT guilty?

So, is that it?  Will raccoons come to rule the world?  There’s advice all over the internet about repelling/thwarting raccoons, from more tightly-fitting trash can lids to water sprinklers to wolf urine (eww).  I haven’t tried them all, but here’s a list of sites, if you’re interested:

How to Get Raccoons Out of Your Yard (ehow)

Raccoons in the Attic

The Survive and Thrive Boomer Guide

What do you think of raccoons?  Adorable, pesky, dangerous?  All three?  Have you had any experiences of them that you’d like to share?  I’d love to hear from you!