posted on 07/15/2011
Instead of “Fashion Friday,” today will be “Flashback Friday.”  I’m re-posting an earlier piece on seance cons in the 19th century, and the devices used.  Enjoy!
The Entertainment Circuit

We often think of seances as events held inside private homes, sort of like consulting a fortune-teller’s tent at a carnival.  Certainly, many mediums worked in this way, but the biggest money-making venue for spiritualist performers was the stage.  Mediums, magicians and mind readers played up the glamor and drama of their special access to the spiritual world. 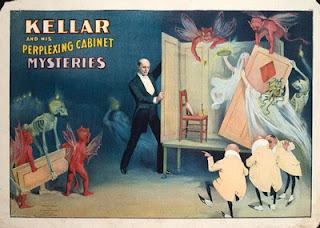 Kellar the Magician (Harry Kellar), was particularly successful.  His tricks, such as ‘The Vanishing Lamp’ and ‘The Levitation of Princess Karnac‘ made him a popular draw.  One of his most famous illusions is depicted in the poster to the left: the ‘spirit cabinet.’  This was an invention of Kellar‘s mentors the Davenport Brothers, which came to be widely used by other spiritualist performers in the 19th century. “By confining himself to the cabinet while feats of unexplained trickery manifested around him, Kellar could ‘prove’ the tricks were products of an unseen spiritual hand.”

Other Tools of the Trade:

Even the home-bound seance medium needed some props in her arsenal.  “Spirit trumpets” were horn-shaped speaking tubes that were said to magnify the whispered voices of spirits so that mortals could hear them. 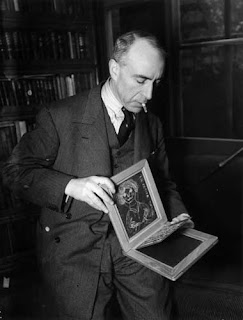 “Spirit slates” consisted of two chalkboards bound together that, when opened, were said to reveal messages written by spirits.  The trick was performed by putting a blank slate on an audience member’s head, or asking him/her to hold it under the table.  Then, after a suitable interval, a chalk-written message would be revealed.  It wouldn’t be that difficult to switch out a pre-written slate, or for the medium to hold a piece of chalk in a ring and become proficient at writing under the table. 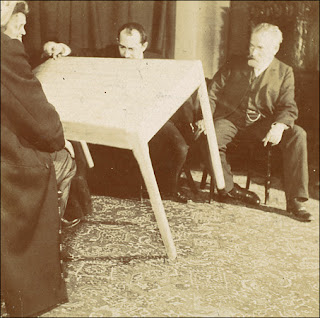 “Séance tables” were special light-weight tables which were said to rotate, float, or levitate when spirits were present.

Next week:  Exposures of frauds, and thoughts on why so many women were mediums.

Thanks for reading,
Kathy

Watercooler Wednesday – I don’t know why, but I want it!
Brother Cadfael, Master of Mystery
©2023 K.B. Owen, mystery writer— All Rights Reserved
website by Memphis McKay