Welcome!  Looking for a fun quiz?  Here’s a compilation of the mystery quizzes from my Mystery Monday series, which featured a classic detective and included a

short quiz for fun.  While the series was ongoing, the answers were revealed in the following week’s Mystery Monday installment.  I’ve collected the first six sets here.  If you’re stumped, feel free to check out the links to the answers!

1. Sherlock Holmes is partly modeled after a person in Sir Arthur Conan Doyle’s life.  His name was:

3. Nancy Drew had two friends (who were probably jealous of her cool red roadster!) who acted as her sidekicks and assisted in her investigations.  They were:

Answers to the above can be found in the Charlie Chan post.  Which brings us to the next set of questions:

3. True or False: Sherlock Holmes was once bested by a woman.

4. True or False: one of the classic British detectives wore a monocle.

Answers to the above can be found in the Miss Marple post.  Which brings us to the next set of questions:

Answers to the above can be found in the Nick and Nora Charles post.  Which brings us to:

2. What made the t.v. detective series Columbo different?
3. True or False: Edgar Allan Poe wrote detective stories.
4. What nationality was Hercule Poirot, and why did Agatha Christie make that choice?
Answers to the above can be found in the Mrs. Pollifax post.  Which brings us to:

4. This detective said:  ”Warning.  Assholes are closer than they appear.”

For answers to the above, go to the Hercule Poirot post.  Which brings us to:

For answers to the above, go to the Nancy Drew post.  Which brings us to:

For answers to the above, go to the Hardy Boys post, which brings us to:

For answers to the above, go to The Three Investigators post.

What trademark tune does Columbo whistle (beginning with the episode “Any Old Port in the Storm”) which the producers worked into the musical theme?

The answer can be found in the Mike Hammer post.

That’s all for now; this page is getting long!  If you’d like more classic detectives and mystery quizzes, check out the following links: 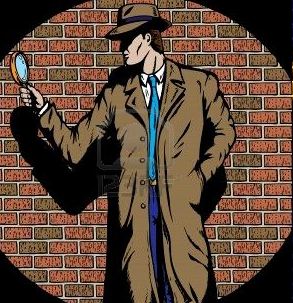