Ooh…bacon.  The bad boy of the food world, with its high-fat, high-sodium, preservative-laden attitude.  And yet…we can’t stay away, whether it’s a breakfast buffet at Big Boy, an appetizer at Coastal Flats (love their brown sugar-cured bacon/deviled eggs with spiced pecans dish), or the humble BLT.

Bacon Roses for your sweetie, from Pamela V. Mason’s blog (which you should check out; there’s even more bacon there):

…chocolate (I love bacon. I love chocolate.  Hey, I have an idea…):

…coffee (perhaps you can dunk your bacon in your morning java, and get the same effect?):

…dental hygiene products (eww, aren’t we trying to clean the bacon taste OUT of our mouths?): 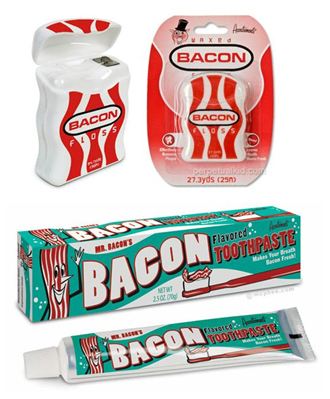 Maybe bacon-scented keyboards will be next, LOL.

So, there you have it!  A short trip through bacon-land.  There are many more examples, but we have a weekend to get started on.

Have you run across other unusual uses for bacon?  Any recipes you’d like to share?  What’s your favorite can’t-resist-even-though-it’s-bad-for-you food?  I’d love to hear from you!