What do Milton, Darwin, and Captain Underpants have in common? Banned books week.

Hi there, fellow readers! The American Library Association has designated September 21-27th Banned Books Week, with the goal of bringing attention to banned or “challenged” books. Here’s the Association’s statement of purpose, along with its definition of what constitutes a banned or challenged book: 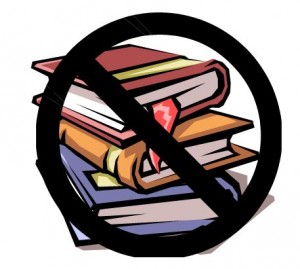 Each year, the ALA’s Office for Intellectual Freedom compiles a list of the top ten most frequently challenged books in order to inform the public about censorship in libraries and schools. The ALA condemns censorship and works to ensure free access to information.

A challenge is defined as a formal, written complaint, filed with a library or school requesting that materials be removed because of content or appropriateness. The number of challenges reflects only incidents reported. We estimate that for every reported challenge, four or five remain unreported.

Many of us are already familiar with banned books from earlier decades: Twain’s Huckleberry Finn, F. Scott Fitzgerald’s The Great Gatsby, Alice Walker’s The Color Purple, and Harper Lee’s To Kill a Mockingbird, among others. It probably wouldn’t surprise you to know that Charles Darwin’s Origin of the Species (1859) was banned by many institutions when it first came out, although one institution might surprise you: Trinity College in Cambridge, Darwin’s own alma mater. You know you’ve got a controversial book on your hands when your own college bans it. Of course, I have a problem with colleges banning books to begin with, but this is the 19th century we’re talking about. The concept of natural selection turned the Victorian notion of the universe on its head.

It’s a shame John Milton (of Paradise Lost fame) wasn’t around when Darwin’s book was banned.  That 17th century poet (who had some of his own writings banned during his lifetime) was a vehement critic of censorship. In 1644 he wrote an anti-censorship treatise, Areopagitica: A Speech of Mr. John Milton for the Liberty of Unlicenc’d Printing, to the Parlament (sic) of England. He was responding to Parliament’s passage of the Licensing Order of 1643, which required all authors to have a government-approved license before publishing their work.

The major premise of Areopagitica is that one cannot know the good without the bad, and truth cannot prevail in the world without the open challenge of other ideas that can be debated and examined. It’s heavy reading, but here are some of my favorite quotes from the essay:

For books are not absolutely dead things, but …do preserve as in a vial the purest efficacy and extraction of that living intellect that bred them.

Many a man lives a burden to the Earth; but a good Book is the precious life-blood of a master-spirit, embalmed and treasured up on purpose to a life beyond life.

I cannot praise a fugitive and cloistered virtue, unexercised and unbreathed, that never sallies out and sees her adversary, but slinks out of the race….

Let her [Truth] and Falsehood grapple; who ever knew Truth put to the worse in a free and open encounter? Her confuting is the best and surest suppressing.

Sadly, when Charles II was restored to the throne, many of Milton’s works were burned and he was arrested (though later freed through influential friends). It would take a long while for Milton’s arguments for free speech, both written and spoken, to take hold in society.

What’s interesting about the current list of banned books is that  several of them are in the middle-grade and YA categories: Captain Underpants by Dav Pilkey, The Hunger Games by Suzanne Collins, and Bone by Jeff Smith. The other books on the list often claim the reason for being challenged as “unsuited to age group.” We’ve moved into an era where we are more aware that our children are being exposed to alot of inappropriate material, particularly on the internet. It’s natural to want some control over that. But is making that book unavailable to every child and teen who uses that school’s library the best way to accomplish that? Are my sensibilities as to appropriate reading for my child better than your sensibilities? (Frankly, I’d be delighted if my reluctant reader would willingly pick up a book). I’d love to hear your thoughts on the subject. 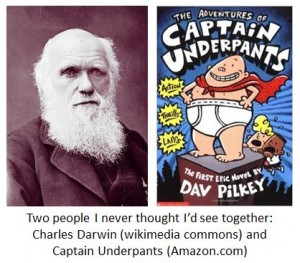 So, how will you give a nod to banned books week? Perhaps by looking over some of the lists of books that have been challenged or outright banned throughout history? Reading a previously banned book? Discussing censorship with your peers or your children? All terrific activities, and I’d love to hear from you!

Censorship in Libraries and Classrooms: Myths and Realities

Captain Underpants tops list of most challenged books in 2013 – CNN.com

12 thoughts on “What do Milton, Darwin, and Captain Underpants have in common? Banned books week.”