Fan Fri (for mystery lovers): “The Saint” by Leslie Charteris

It’s Fan Friday for mystery lovers, when we take a look at a favorite detective or mystery-related subject.  Today’s detective:

Some interesting facts about Leslie Charteris and The Saint series: 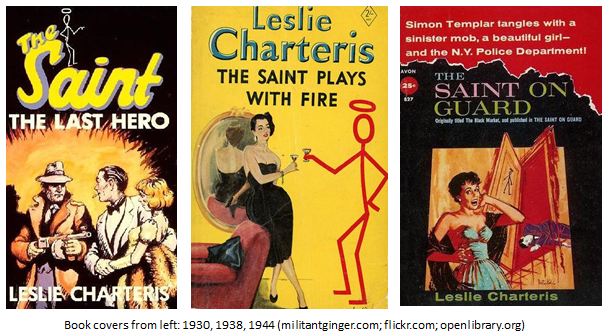 1.  Charteris was born to an English mother and Chinese father in Singapore in 1907.  (His real surname was Bowyer-Yin; he had it legally changed in early adulthood).

2.  Charteris grew up in England, and left Kings’ College to start a writing career.  According to a Wikipedia article (which I haven’t been able to verify with a second source, so take it for what you will) Charteris had lots of other interesting jobs and activities, such as prospecting for gold and pearl-diving.

3.  He moved to New York, which he called “a case of love at first sight.”  Unfortunately, he had to keep renewing his 6-month visas because of the Chinese Exclusion Act (1882-1943), which did not allow immigrants with “50% or greater of Oriental blood” to permanently reside in the U.S.  Later, a Senate bill signed by FDR allowed Charteris and his daughter to go through the citizenship process and become American citizens.

4.  The first appearance of The Saint was in Meet the Tiger (1928), and continued through more than 50 novels (until 1983).  Charteris also worked as scriptwriter for Paramount Studios on several Saint films in the mid-1930s.

The appeal of The Saint:

1.  One man, righting wrongs.  No committee, no jury polling, no Miranda rights.  And he isn’t above a little law-breaking in the cause of justice.

2.  He’s elegant, handsome, sophisticated (and British – American women get all swoony over suave British men).  In the novels, all sorts of dames fling themselves at him.

3.  He’s rich and mysterious; no one knows where he or his money comes from.

4.  He lives up to his “knightly” name of Templar:  chivalrous, brave, putting himself in danger to fight evil – sort of a super-hero detective.

The Saint is everywhere!

Radio (yep, that’s Vincent Price, who was the voice of The Saint): 1944-51 (click here for the archive of free audio files):

Above, from left to right: two of the films from the 1930s; the popular television series starring Roger Moore, which ran 118 episodes from 1962-69; the 1997 film starring Val Kilmer.

But wait!  The Saint keeps coming back…

The Saint Goes to New Orleans, starring James Purefoy, went into production this past summer.  No release date yet.

Do you remember The Saint series on television?  Have you read any of the books by Charteris?  I’d love to hear from you!

21 thoughts on “Fan Fri (for mystery lovers): “The Saint” by Leslie Charteris”

Tuesday Terrific: Men and Women, through a humor lens
ROW80: In the Belly of the Beast, Week 4
©2022 K.B. Owen, mystery writer— All Rights Reserved
website by Memphis McKay