Today’s Fashion Friday post comes to us from mystery author Ellen Byerrum.  This lady knows her fashion, and I’m so lucky to have her here today.  Ellen is the creator of the Crimes of Fashion series, featuring Lacey Smithsonian, a Washington, DC fashion reporter, where the circumstances and the solutions hinge upon fashion know-how. 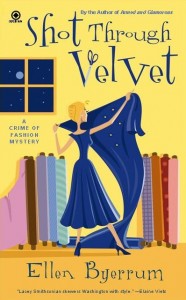 The latest book in the series, Shot Through Velvet, takes Lacey on assignment to the last velvet factory in Virginia on its final day of operation. Her story takes a turn when a blue body is pulled out of the dye tank.  A starred review in Publisher’s Weekly said it provides a “serious look at the decline of the U.S. textile and newspaper industries and provides much food for thought.”  For more information about her series, visit her website at:  http://www.ellenbyerrum.com.

The clothes we wear tell stories. They can’t help it. They announce things about us before we even open our mouths. They reveal whether we are casual or dressed up, whether we like bright colors or dull, whether we conform to fashion or turn our backs on it. What we wear can reflect the jobs we have, or used to have, or wish we had. They can hint at our fantasies—or demonstrate our lack of imagination.

Yes, it’s pretty obvious that I love clothes, which is why I explore the language of apparel in my Crime of Fashion mysteries featuring fashion reporter and sleuth Lacey Smithsonian. Lacey doesn’t want to be a fashion reporter, she wants to be taken seriously as a “hard news” reporter. But Lacey has a unique fashion skill, something I call Extra-Fashionary Perception (EFP). There is a lot more to Lacey than fashion, and a lot more to my mysteries than clothes. They also address crimes in their cultural context and social issues, with comic intent. As the writer, I try never to simply label-drop.

When I research my books, I learn a lot about various types of attire. Lacey, for example, wears a lot of vintage clothing, mostly from the late 1930s and 1940s.  I love that period because women were strong, independent and attractive, and their clothes were well made and flattering. The styles were made for real women, not skinny fashion models. Lacey has a trunk of fabulous vintage clothes, patterns and materials, which she inherited from her late Aunt Mimi. I do not have such a bottomless magical trunk of clothes, but I can imagine having them. And I occasionally pick up vintage clothes, when I can find them. I also pick up a lot of fun facts about fashion.

When I started writing mysteries, I had no idea that during the Second World War, federal regulations were implemented affecting fashion. The government wanted to save materials, so it essentially outlawed styles that required more fabric, such as French cuffs. Shirts could only have one pocket. Silk was to be used only for the military (parachutes) and wedding gowns. Nylon stockings, which were introduced at the 1939 World’s Fair, were an immediate hit with American women. But with the war, nylon production, like everything else, shifted to military use. When women found out their beloved nylons were endangered, they rioted in department stores over the dwindling supply. I mention a few of these facts and more in Designer Knockoff, my second book. There are two mysteries in play, one in the present and one which takes place in the 1940s, when an aspiring female designer disappears.

More recently, I was fortunate to be able to tour the last velvet factory in Virginia just before it shut down. Velvet is a major focus of my latest mystery Shot Through Velvet, in which Lacey gets to tour such a factory, in the course of which she discovers a dead body.  The term “shot through velvet” is also a type of velvet in which two colors are woven into the fabric, say, blue and silver. The fabric’s hue changes depending on how the light hits the material—blue one way and silver the other. It reminds me of the way that the facts, the story, or even the characters can change, depending on how you look at them.

Clothes have always told stories about power, status and attraction. We dress for success and to impress. And for fun. As Lacey Smithsonian says, Life is not a dress rehearsal! If you’re the star, don’t dress like the understudy. 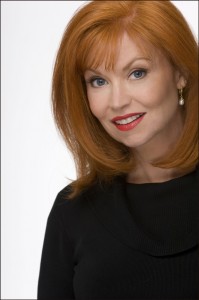 Ellen Byerrum is a former Washington, D.C., news reporter, and a playwright, and she also holds a Virginia private investigator’s registration. Her Crime of Fashion mysteries star Lacey Smithsonian, a reluctant fashion reporter in Washington D.C., “The City Fashion Forgot.”