Welcome to Masters of Mystery Monday, where each week we feature a fictional detective and examine his or her unique contribution to mystery fiction.

This week, I am thrilled to have mystery author Jeri Westerson guest posting about her detective: 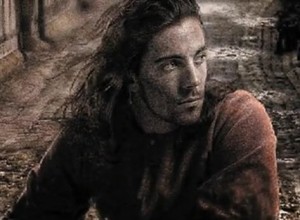 My Detective and Me

I have a secret relationship. My husband doesn’t really know about it, nor do my friends. And I don’t know that it’s particularly healthy. Secrets rarely are. The guy in this relationship is demanding. He’s troublesome. He’s moody. He’s relentless. But he’s all mine.

Crispin Guest, you sexy beast. Yes, I get a teeny weeny bit obsessed with my creation, my ex-knight turned detective. I mean, look at Dr. Frankenstein. He was all about the obsession of his monster man. I don’t get a great lab like him, though. No lightning, no strange platforms, no Igor (and I could really use an Igor. Who couldn’t?) What I do have is a home office, a computer, and my little ole imagination. Now that’s a dangerous combination!

Crispin Guest came out of years of reading hard-boiled detective fiction and Brother Cadfael stories. Yup. That’s quite the combination, you say? It’s the stuff that dreams are made of. Or, to put it in writerly prose, if you can’t find what you want out there to read, then write it yourself. So I did.

From a technical aspect, I had to devise a believable detective for a time period that didn’t yet have them. In the fourteenth century, London elected two sheriffs annually, and they came from the merchants in the town from the various guilds, like grocers, fishmongers, mercers, drapers, dyers, vintners, etc. They were prominent citizens and later, it became a rule that the Lord Mayor had to be elected from those men who had served as sheriffs. Did the sheriff go out and investigate crimes, knock on doors, ask questions, do some forensics? Nope. They were peacekeepers. It wasn’t about investigating. That was the Coroner’s job, actually, and he only asked a few questions and then made the locals, the guys living near the crime scene, do the real investigating. It was an interesting system, but in a place where everyone knew everyone else’s business, it seemed to do the trick.

But what if someone needed something found that was stolen? What if that something wasn’t exactly a thing you’d want the sheriff to know about? What if you suspected your wife of infidelity? Who you gonna call?

Not the sheriffs, certainly. They can only do so much as it is. So the idea that a man of intelligence and education (in a time where reading and writing were still on the rare side), skilled with many languages, skilled with weapons and was familiar with what a body looked like—how long dead, blood spatter, all from his experience on a battlefield—didn’t seem so farfetched to recreate himself as a medieval detective. Especially when that man desperately needed income and was used to being his own man.

Crispin Guest was a disgraced knight, a man who moved in the circles of kings and princes. He was a baron, a landholder, a warrior and a statesman in training. He was mentored by the powerful duke of Lancaster and thought of him as a surrogate father. When the duke’s nephew, the ten-year-old Richard, was in line to take the throne instead of the noble duke, a conspiracy simmered to put him on the throne, and being the loyal man he was, Crispin threw in his lot with the traitors. All was lost when the conspiracy came to light. Though the others were executed, Crispin’s life was spared by his mentor. In recompense, he lost all: title, lands, wealth, status. Thrust alone into the lowly streets of London, Crispin reinvents himself as the Tracker, working for sixpence a day…plus expenses.

This time in the newest, TROUBLED BONES, Crispin must travel to Canterbury for his next job and throws his lot in with some pilgrims. And before you know it, there’s a murder in the cathedral along with the appearance of Crispin’s old friend, Geoffrey Chaucer. I get to mix in my childhood favorite the Canterbury Tales with Crispin and murder, true medieval noir.

Crispin is dark and brooding, a cross between Mr. Darcy and Raymond Chandler’s white knight Philip Marlowe, only in Crispin’s case, he really was a white knight. Yes, he’s a sexy beast. And though women may come and go in his life, there is one who will always be loyal, always stick up for him. Right there where I belong; in front of the keyboard. 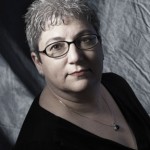 Jeri isn’t as good to Crispin as she would like to think. After all, she keeps getting him into trouble time and again. See what we mean by reading a chapter of her latest TROUBLED BONES at www.JeriWesterson.com. TROUBLED BONES will be released by St. Martin’s Minotaur on October 11. Read what Crispin has to say at his own blog at www.CrispinGuest.com. 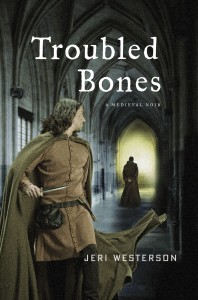 K.B.’s note:  I’ve read some of the Crispin Guest series, and they are fabulous, action-packed mysteries with wonderful period detail and neat twists.  But it’s Crispin who is the best part of this series: he’s smart, tough, and bold.  He has a way with the ladies, or do they have their way with him?  You’ll want to check it out!

Have you read the Crispin Guest series?  What are your favorite qualities in a detective?  We’d love to hear from you.