Margaret (Gail) Frazer, the author of the Dame Frevisse Mysteries and the Joliffe Player Mysteries (both set in medieval England), died last week at age 66, after a long fight with breast cancer.  In honor of her legacy, here’s my post from 2011 (with some updating) about her amateur sleuth, Dame Frevisse.  Enjoy!

Welcome to Masters of Mystery Monday, where we feature a fictional detective and examine his or her unique contribution to mystery fiction.  This week: 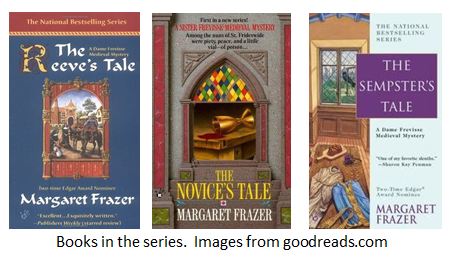 Some interesting facts about Margaret Frazer and the Sister Frevisse series:

1.  The setting for the series is mid-15th century England, in the Benedictine cloister of St. Frideswide.  Dame (a designation, similar to “Sister”) Frevisse is a devoted nun with a sharp mind and a worldly eye for sin.  This is the time of King Henry VI, and the connections are plentiful:  Frevisse’s uncle by marriage, after all, is Thomas Chaucer, son of the famous Geoffrey Chaucer.  Most of the mysteries are locally-centered, but some involve national interest and political backstabbing, too.

2. “Margaret Frazer” was originally a writing team, made up of Mary Monica Pulver and Gail Frazer.  They co-wrote the first six Sister Frevisse books; then Pulver grew tired of the series and Gail Frazer took over solo, writing eleven more.

3.  There are 17 books in the series, starting with The Novice’s Tale (1992), and the last being The Apostate’s Tale (2008).  The titles come from/are loosely connected to Chaucer’s The Canterbury Tales.

4.  A character in the Dame Frevisse books, Joliffe the traveling player, became the central character in his own series (with “Play” in the titles rather than “Tale”), of which there are 7.

5.  Margaret Frazer has won a Herodotus Award (given by The Historical Mystery Appreciation Society for excellence in the field of mystery writing) and has been nominated several times for an Edgar Award (given by Mystery Writers of America).

1.  Period detail: just the right touch of casual reference that conveys the time period, without being in-your-face.  Here’s a sample, from The Widows’s Tale:

There was a month yet to the beginning of harvest but everything promised a good year for the nunnery, and Dame Frevisse – taking her turn again as hosteler, in charge of the nunnery’s guesthall and guests – took pleasure in the days going simply past in a quiet flow of duties and the eight daily Offices of prayers and psalms.

2.  A well-plotted puzzle, with twists along the way.

3.  Although these nuns have taken vows of poverty, chastity, and obedience, they’ve never taken vows against gossiping, grudges, and pettinesss.  Plenty of human frailties abound.

4.  Frevisse is an interesting, complex protagonist, who struggles with her own weaknesses.  Often it is those weaknesses which help her get closer to the solution.

Here’s a book trailer of The Murderer’s Tale:

Margaret Frazer, “On the Joys of Research”

Have you read the Sister Frevisse series?  Do you have a favorite historical period you like to read about?  I’d love to hear from you.

Humor for the Tech-Challenged
My Love Tweets Before Twitter
©2022 K.B. Owen, mystery writer— All Rights Reserved
website by Memphis McKay