Masters of Mystery: The Three Investigators

We continue with our favorite kid detectives this week, with a suggestion from Andrew Mocete (thanks, Andrew!):

Some interesting facts about the Three Investigators series:

1. The first 30 books, published between 1964 and 1979, were actually titled Alfred Hitchcock and the Three Investigators in…. In the first few books, Hitchcock was written in as a character to introduce and conclude the mystery.

2. Alfred Hitchcock himself never had a hand in the writing of the series.  Hitchcock was purportedly paid handsomely for use of his name brand and image, and by some accounts reserved the right to reject cover art before printing.

3. The series creator, Robert Arthur, Jr. (who wrote the books until 1969, when a succession of other authors took over) wanted to give young readers a mystery series with better writing and more puzzle-complexity.  This was almost 40 yrs after the Hardy Boys’ debut.

4. Kids around the world have enjoyed the Three Investigators; it has been translated for readers in Germany, Poland, India, Slovakia, France, Spain, and Bangladesh, to name a few.

5. The series had a number of spin-offs, but they are out of print in the U.S.  The books are still quite popular in Germany.

What made the books so appealing? 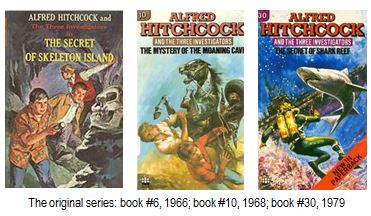 1. The three investigators – Jupiter Jones, Pete Crenshaw, and Bob Andrews – banded together to form a detective agency.  They didn’t wait around (like those amateur Hardy boys) for mysteries to fall in their laps.  They were analytical thrill-seekers.

2. Can you say “awesome hang-out”?  Their office was an abandoned mobile home trailer, well-hidden in a salvage yard, and could only be accessed via secret entrances and tunnels.

4. Lots of action, as you can see from the covers, right.

Beyond the books: movies

Owing to the popularity of the series in Germany, two films have been made (in English, to broaden its appeal):  in 2007, The Secret of Skeleton Island, and in 2009, The Secret of Terror Castle. Here’s a trailer to the first film (and the link, in case the embed doesn’t work) http://youtu.be/yGc2JZXtKaE:

Three Investigators U.S. Collector’s site – a wonderful resource, with links to more info about the artists and authors of the series, and much more.

2. True or False:  Raymond Chandler was a Pinkerton.  It was Dashiell Hammett who was a Pinkerton, which helped in his P.I. stories, as you might imagine.  (Apologies to Loree Huebner. in the comments section.  You were correct!)

A) No more than one secret room or passage is allowable

B) The butler should be the culprit – in fact, rule #11 states that:

A servant must not be chosen by the author as the culprit. This is begging a noble question. It is a too easy solution. The culprit must be a decidedly worth-while person — one that wouldn’t ordinarily come under suspicion.
For the entire list of Knox’s rules, click here.

C) No Chinaman must figure in the story

D) Twin brothers, and doubles generally, must not appear unless we are duly prepared for them

Since Alfred Hitchcock was the ersatz patron of the Three Investigators, this week’s quiz is all about him:

1. What film used the tagline “The Master of Suspense presents a 3,000-mile chase across America”?

2. What is the music used for Hitchcock’s television series theme?

3. Who starred in the most Hitchcock films?

4. What does nearly every leading actress in Hitchcock’s films have in common?

7 thoughts on “Masters of Mystery: The Three Investigators”