While I’m away, the intrepid, younger-than-she-looks super-spy Mrs. Pollifax makes a return visit to Masters of Mystery Monday!

Mrs. Emily Pollifax, an elderly (65 years) resident of New Brunswick, New Jersey, widowed with two grown children, seems an unlikely heroine for an action-packed spy/mystery series, but that’s just what she is.  Bored with her weekly rounds of volunteer jobs, hobbies and clubs, Mrs. P. decides it’s time to fulfill a lifelong dream which marriage and motherhood prevented her from pursuing:  being a spy for the CIA.  She goes about applying to the CIA with the naivete, flexible thinking, and straightforwardness which become the hallmarks of her approach in more desperate situations in the series, and the results are comedic and refreshing.  She’s known for her intelligence, quick-thinking, compassion for people (in the first book making friends with her Albanian jailers through backrubs and chummy chats), and absurd hats.  Although a good part of each novel is light-hearted (cozy), Mrs. Pollifax doesn’t get away unscathed.  Over the course of  14 books, spanning 1966-2000, she is drugged, stabbed, shot, interrogated, kicked out of the country, tied up, tortured, and left to die.

The backdrops in the series are riveting and exquisitely described: Romania, Africa, Thailand, China, and Turkey, among others.  We get a mixture of customs, history, religion, and politics with each new locale.

Only the final book, Mrs. Pollifax Unveiled, is available as an e-book.  But they are all worth reading. 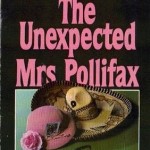 I advise starting with the first, The Unexpected Mrs. Pollifax.

2. What made the t.v. detective series Columbo different?
3. True or False: Edgar Allan Poe wrote detective stories.  True: his detective was C. August Dupin, retired from the Surete.  “The Murders in the Rue Morgue” and “The Purloined Letter” are his best known detective stories.
4. What nationality was Hercule Poirot, and why did Agatha Christie make that choice?  Poirot was Belgian, although other characters mistake him for French (which annoys him to no end).  Christie made him Belgian because Hitler invading Belgium was what brought England into the war and there were many Belgian refugees in England; this would make a foreigner as a central character more palatable to a British reader.