I’ve just returned from a wonderful weekend at Malice Domestic, a convention for lovers of cozy mysteries.  I’ll be blogging about that on Wednesday.  In panel discussions and general chit-chat this past weekend, guess which detective came up most often as the original influence for these cozy mystery writers and readers?   (Sherlock Holmes was second, by the way).

She turned 80 last year, but you have to admit the old gal looks great for her age.

Some interesting facts about the Nancy Drew series:

1. Nancy was created by Edward Stratemeyer, of the Stratemeyer Syndicate; the first “Carolyn Keene” was Mildred A. Wirt Benson (who was sick of “namby-pamby” girl characters), and the first artist was Russell H. Tandy.

2.  Nancy’s creation in context: her first mystery, in 1930, was only ten years after women had been given the Constitutional right to vote.

3.  In 1959 the series was revised and updated, mostly to eliminate racist stereotypes and figures of speech.  Many scholars believe that Nancy’s character was toned down and made more lady-like, too.

4.  The Nancy Drew Mystery Series ended in 2003, with volume #175, Werewolf in a Winter Wonderland.  Other series have sprung up since then.

5. Much like the biblical creation story where man is created first and woman second, The Hardy Boys series debuted three years earlier than Nancy’s series.

Why is Nancy Drew so appealing?

2. She’s got a cool dad who sometimes helps her in her cases but never hinders her.  He says “Be careful, Nancy,” and his parental job is done.  (Wish it were that easy).

4. She’s daring, and gets into all kinds of physical danger.  To the best of my recollection, she’s been kidnapped, tied up, trapped or locked in a room, thrown down an old well with rats (love that one), and knocked out.  Feel free to contribute any others you can think of in the comments section!

5. Ned Nickerson is really handy, but doesn’t get all macho-protective of her.

6. Bess and George as super-cool chums to have around.

Nancy Drew breaks out of the book: 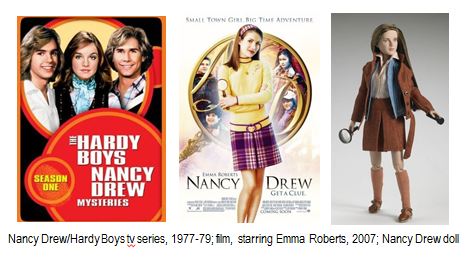 Nancy Drew Blogs (there are many more):

Around the World with Nancy Drew

The material out there on Nancy Drew is staggering, so this post is a feature rather than a comprehensive look at the girl detective.  I welcome contributions from readers – give us your tidbits of information!

3. True or False: Agatha Christie went on archeological digs.  True:  Agatha’s second husband was archaeologist Max Mallowan; she accompanied him on most of his expeditions, and set several of her mysteries in the Middle East.

U) disappeared for 11 days and when she was found had no memory of the time.  An excellent and detailed account of this episode in her life can be found here.

Hope you’re enjoying the quizzes.  Were you a fan of Nancy Drew in your younger days?  What was it about her (or her circumstances, or the mysteries) that appealed to you most?  I’d love to hear from you.