Where my research takes me: baby cages

Internet searches are the oddest things. This time, I wasn’t doing research for the next Concordia Wells mystery (although in another post I’ll have to share with y’all some cool stuff I’ve learned about 1890s East Hampton, Long Island).

This time, I was researching catios.

What is a catio, and what does it have to do with baby cages?

Okay, getting to that.

First, my cat. Tora is a rescue and we care for her as an indoor cat. Not only is it part of the terms of our adoption agreement with the ASPCA, but it’s safer for her. Besides the usual foxes, skunks, raccoons, and other wildlife, we have a colony of feral cats in the woods behind our house and a domesticated cat next door with feline AIDS. Plus our little gal’s only seven and a half pounds fully grown. She’d be outmatched in a fight.

The problem is, she LOVES being outside. It’s obvious her previous owners who gave her up (pregnant and unvaccinated) let her go out whenever she wanted. In nice weather we bring her out to the backyard in her harness (which she can easily slip out of, even the smallest one we could find), and we give her plenty of inside window perches. She loves both, but we know she’s pining for more. So I started looking at protective outdoor options, including a deep, screened-in window box. These, along with larger, screened enclosures for the outdoors have become known as catios: “cat” + “patio.”

On to baby cages:

In one of the articles about these window enclosures, it mentioned that similar contraptions were used for babies in the 1930-50s.

Huh? Was that really a thing? I mean, I grew up in an age where moms held their babies in their laps during car rides, seat belts were optional (and air bags? ABS? Lane departure alert? Sci-fi stuff), kids roamed the streets unsupervised until dinnertime, and parents took their kids on chickenpox play dates, so hey, anything’s possible. I did a bit of poking around.

It turns out that, yes, they were used, but not widely, and mostly in high-rise London tenements in the 1930s. (By the way, there’s no evidence of any reported deaths from these things. Whew). Emma Reed in 1922 applied for a patent for her own design.

I’d love to be able to show you the pics, but they are all copyrighted. However, here’s a British Pathe clip about baby cages. Looks like it was filmed in the post-war ’40s or early ’50s, I can’t confirm the date. Be warned, it’s kinda corny, with a gazillion goofy puns:

But why suspend babies in cages out the window in the first place?

I had the same question!

The answer is an intriguing one, and led me back to the time period of my own novels, the 1890s (funny how that happens). In 1894, L. Emmett Holt, MD published The Care and Feeding of Children (reprinted 8 times between 1894 and 1917). He advocated the liberal “airing” of young children to promote good health.

Fresh air is required to renew and purify the blood, and this is just as necessary for health and growth as proper food.

To be fair, nowhere in the book does Dr. Holt suggest hanging babies in cages out the window–his advice was confined to opening windows to air out the nursery and taking babies out in strollers–but you know how people can be…if a little is good, more must be better! And it had to be tough for moms in upper-level apartments (no elevators) to climb down the stairs with baby and stroller in tow.

So here’s a fun story: among the mothers who took Dr. Holt’s advice about infant airing to heart was Eleanor Roosevelt, after the birth of her first child, Anna. Here’s the passage, as recounted in Hazel Rowley’s Franklin and Eleanor: an Extraordinary Marriage (2010):

A Brief and Bizarre History of the Baby Cage

This is Real: The Baby Cage | Apartment Therapy

Ever had an internet search take you in a bizarre direction? What child-rearing fads do you remember? I’d love to hear from you.

P.S. – we haven’t decided yet about the “catio.” Stay tuned. 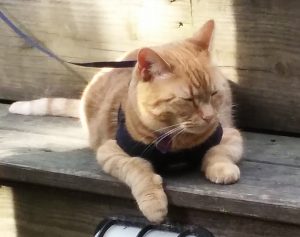 6 thoughts on “Where my research takes me: baby cages”