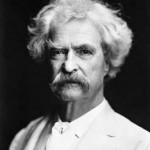 Samuel Clemens, widely-known by his pen name Mark Twain, is probably one of the best commentators regarding the nature of human beings.  He’s certainly one of the most quotable, too.

I won’t be going into his biography because it’s crazy-extensive, but for those interested, this Biography.com link has a good one on him.

Today, Mr. Clemens has something to say on the subject of lying, taken from “Advice to Youth” (1882):

“…the history of our race, and each individual’s experience, are sewn thick with evidences that a truth is not hard to kill, and that a lie well told is immortal.”

Our recent election had plenty of evidence of easily-killed truths, but I doubt that the lies really count – they were neither told well nor long-lasting.  Amateurs.

But throughout our history, I’d say we’ve had some close-to-immortal lies.  In fact, we’ve had some real whoppers.  Here are a couple for your amusement.


In 1869, while workers were digging a well, this 10-ft tall petrified man was unearthed in the backyard of William Newell in Cardiff, NY.  Newell, an atheist, wanted to play a joke on the local Methodist minister regarding the scripture passage about the biblical times when “giants roamed the earth.”  Although it was declared a fake, crowds of people came to see it, and P.T. Barnum had a replica made (when his offer to buy it was turned down) and put it on display.

Ok, you Nessie fans out there (you know who you are), don’t flood me with indignant comments about this post de-bunking the Loch Ness Monster.  But there have been some splendid hoaxes related to Nessie, you have to admit, and here’s one of them. 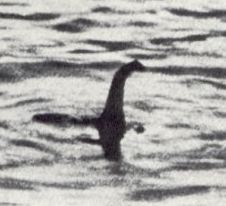 The photo to the left was the iconic picture of Nessie for the longest time, referred to as the “Surgeon’s Photo.”  Colonel Robert Wilson, a British surgeon, said that while he was driving along the road beside the northern shore of Loch Ness in the early morning hours (April 19, 1934), he spotted something, stopped and snapped this picture.  This fueled debate about Nessie for decades to come.

Finally, in 1994, Christian Spurling – then age 90 – confessed to his part in the conspiracy, concocted between himself and Marmaduke Wetherell (I kid you not), a big game hunter.  Wetherell was still stinging from an earlier attempt at fabricating Nessie’s footprints that had failed spectacularly – via a hippo foot umbrella stand.  (Really, you can’t make up this stuff).

Wetherell had Spurling build a toy submarine fitted with the head of a sea serpent, took a photo of it in the water, and then had Wilson (who had a more reliable reputation) be the “front” man for the photograph.  I haven’t been able to find out why in the world Wilson agreed to such a thing, but read more at Museum of Hoaxes.

Goodness knows what Mr. Clemens would have thought of crop circles, but they didn’t start showing up until the ’70s, along with bell-bottoms and rhinestones.  But that’s another post.

In 1978, Doug Bower and Dave Chorley thought up the prank while drinking in the pub. (See?  Nothing good comes of that demon, alcohol).  They weren’t getting much of a reaction at first, but when they picked a more prominent location (this was in Hampshire, England) atop a hill by a busy road, people started noticing.

Some people thought it was the result of weather…so the pub-mates made their designs more complex.  Some thought…aliens.  Of course, not all crop circles can be strictly accounted for, and “cereologists” – no, not people who study cereal (I thought that, too, LOL), but people who study crop circles – claim that there are differences in the way the plants are bent or broken which determine if a circle is man-made or “otherworldly.”

Want to make your own crop circle?  Click here and scroll to the bottom.  Looks really cool.  Alas, we live in the suburbs, so I don’t think it will make a good after-school project for the kids.

These are just a few of many hoaxes in our time, not including all those internet hoaxes that proliferate in our age – you know, things like criminals playing a tape recording of the crying baby to lure women to open their doors at night, or folks waking up in a bathtub of ice with one kidney missing.  Every era has its Cardiff Giant, I suppose.

What hoaxes can you think of?  What’s your opinion of Twain’s assertion that “a lie told well is immortal”?  Does that still apply in our scientific, information-centered age?  I’d love to hear from you.