Imagine young ladies, away from home with the holidays approaching, during a time when it was unconventional for women to undergo such a separation.  In the 19th century, home was a woman’s sphere, the domestic realm over which she ruled.  She didn’t stray far from it.

Around the 1880s/1890s, however, some of the well-educated daughters of the middle class began to get a little restless.   They were the second wave of female college students, following such pioneer women as Lucy Hobbs, Maria Mitchell, and M. Carey Thomas.  Even so, they didn’t represent a large part of the demographic:

from “Determined to be Educated,” American Association of University Women

These students were also a high-spirited lot, involved not only in their studies, but in all sorts of social activities: clubs, dances, plays, teas, charity work, and so on.  They made the holiday season as festive as possible while away from home, until they could return to their families for the winter recess.  For the time being, the college community was their family, and the holiday activities reflected some of the traditions of society at large.

The following are excerpts from a December 15, 1901 article from The New York Times, detailing some of the Christmas activities/performances put on by the students of local Vassar College in Poughkeepsie, New York: 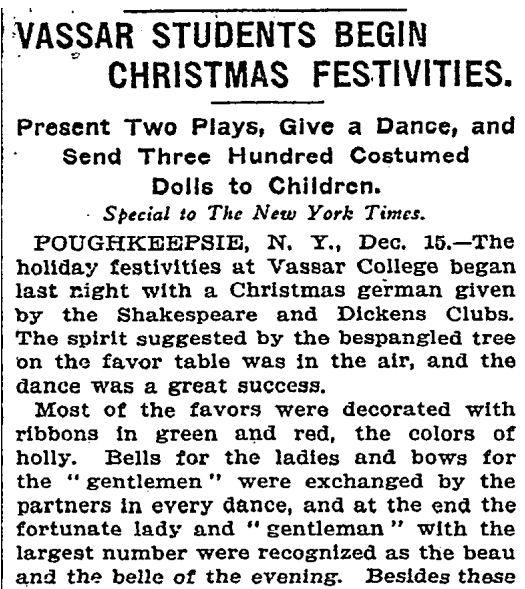 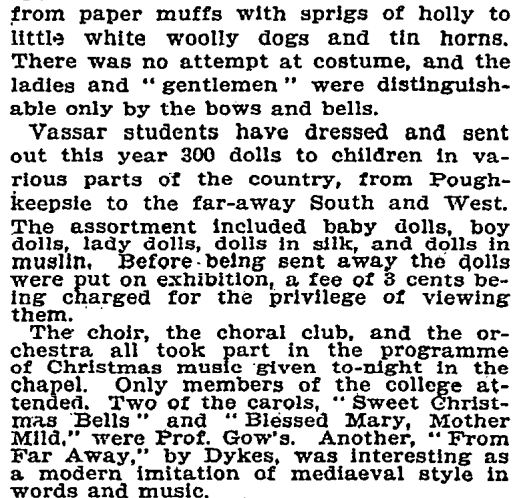 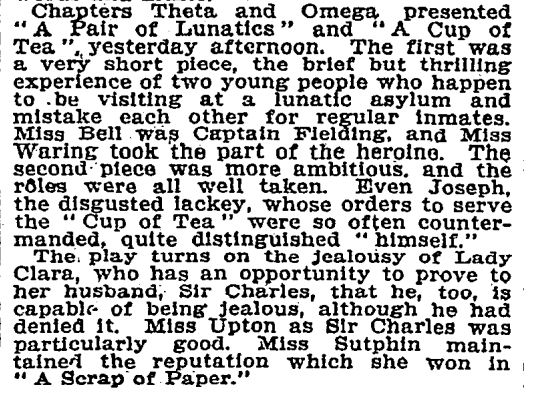 A brief explanation of some of the above:  the article puts “gentlemen” in quotation marks, and cryptically says: “the ladies and ‘gentlemen’ were distinguishable only by the bows and bells.”  This simply meant that, at a women’s-only college event, some of the women students were obliged to act in the roles of “gentlemen” dance partners.  This was a very common practice at women-only institutions, and didn’t carry the connotations that it might today.

In the play mentioned in the article, we have a similar situation: an all-female cast necessitated women adopting male roles; hence the quotation marks in the article when referring to a female player in the male role who “quite distinguished ‘himself.’”  Female students were not permitted to adopt male costume (read: trousers), so other props, such as a cloak, hat, or dagger, would be adopted to indicate the role.  There was a very great concern that women attending college would become less feminine, and college officials took steps to avoid that from happening.

So, what do you think of how women students adapted to college life, and the restrictions of their time?  I’d love to hear from you.

Want more late-nineteenth century Christmas?  Check out my article: Is There A Santa Claus? Yes, Virginia currently published in SocialInDC and other SocialIn sites.

Would you like to read more about these high-spirited college ladies?  How about a cozy mystery series set in an 1890s women’s college?  Two books in the series are currently available: Dangerous and Unseemly: A Concordia Wells Mystery and (just out!) Unseemly Pursuits. Both are available for the Kindle, Nook, and in paperback.  Each novel can be read as a stand-alone, or in sequence.  Perfect for those long winter nights curled up in your favorite reading chair.