When you think of a person as a “spirit medium,” what gender comes to mind?  (Quick – don’t think about it).  A woman, right?  This was especially the case in the 19th century.  Although there certainly were male mediums, the nineteenth century spiritualist movement was dominated by women.

Here are some of the most famous – or infamous – women mediums: 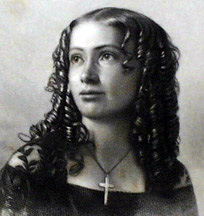 (Looks angelic, doesn’t she?).   As a teen, she would fall into trances, write messages, and speak in voices that didn’t sound like her own.  She was purported to heal people.  Her parents exhibited her abilities publicly in the spiritualist circuit.  In one dramatic session, Cora “channeled” the spirit of a German doctor and performed surgery.  (Keep in mind that she had no formal education beyond the age of eleven).

Later in her teen years, her healing powers subsided, and she became a trance lecturer.  She would prove her abilities by various tests.  I’ve kept the following description verbatim from a very interesting site (the link is below):

It was here that Cora and her spirit guide Ouina impressed Professor J. J. Mapes of New York City whilst he was investigating Spiritualism. He chose the subject of Primary Rocks, which Ouina (through Cora) lectured about in front of a packed audience. Mapes then went on the platform to address the crowd stating “I am a college educated man, and have been all my life an investigator of scientific subjects and associated with scientific men, but I stand here this afternoon dumb before this young girl.”

She was married four times – rather scandalous back then – and went by her husbands’ surnames: Hatch, Daniels, Tappan, and Richmond (searches will find her under many of these).  Her first husband, Benjamin Franklin Hatch, who she married at age 16, was a professional mesmerist (hypnotist).  He also acted as her manager, scheduling very profitable venues, and it was through his efforts that she became famous. 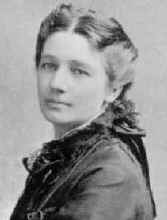 Victoria grew up with a father that always had a get-rich-quick scheme, from patent medicines (with a high concentration of alcohol), to spiritualist tours, where Victoria and her sister, Tennessee (Tennie) would do healings and go into trances.  At the tender age of fifteen, Victoria married Dr. Canning Woodhull, who turned out to be a drunk and a womanizer.

While in those early years there were a few occasions where Victoria and Tennie would resume their spiritualist performances, Victoria is best known for her efforts to secure women’s rights, her belief in free love, and her aborted run for President of the United States.  She never shied from controversy, and it seemed to follow her.  She was also a businesswoman under the tutelage of Vanderbilt, and ran a family newspaper, Woodhull & Claflin’s Weekly.  This newspaper was the first to print Marx’s The Communist Manifesto in English. 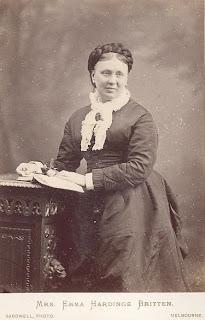 Emma was born in London, but moved to New York to become an actress.  She had demonstrated clairvoyant ability at an early age, but her life was changed when, a year after moving to New York, she predicted the sinking of the steamship Pacific. Through an alphabet board, with the aid of the spirit of one of the dead crew, she was given details of the wreck, with the following result, as described on a spiritualist website:

“Because of the nature of the details given through her mediumship, Emma Hardinge was threatened with prosecution by the owners of the boat when the story was made public, but all the details were found to be true and accurate.”
http://www.fst.org/hardinge.htm

Emma spent the rest of her life as an advocate for spiritualism, going on grueling lecture tours with her husband, writing several books, and working to establish other spiritualist societies around the world.

These are just a few of the many female mediums, along with clubs, retreats, and societies primarily made up of women, who avidly pursued the spiritual world.  Why?  Well, consider what having “spiritual powers” would mean to a 19th century woman.  For her, it would be access to another kind of life:  fame, money, travel.  She could escape from her limited domestic sphere, where her legal rights were few, and responsibilities were many.

“Moreover, channeling spirits gave women a chance to speak words and ideas not normally permitted to a lady–and, because of the thousands of converts to this religion you could see, hear, and touch, people avidly   listened to what these females had to say.”  Sometimes, as was the case with Cora Scott, a lecture on women’s rights would be the topic of the evening.  (Thanks to Catherine Karp, http://francescamiller.com/seances.html).

So, what do you think?  Are there any scams/cons out there today that more women gravitate toward or are more successful at?  Ever attended a seance?  How about that Ouija board collecting dust in your closet?

6 thoughts on “Flashback Friday – 19thc Spiritualism: the Ladies Take Over”