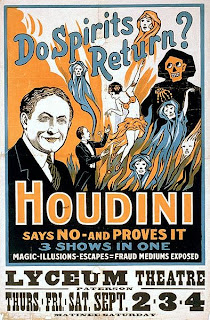 “GOTCHA” METHOD 1: Professional De-bunkers
Almost as plentiful as fraudulent mediums were the debunkers who sought to catch them at it.  Pictured below were some of the most well-known of their time:  researchers Harry Price (National Laboratory of Psychical Research, University of London) and Frank Podmore (Society for Psychical Research, London), and professional magicians John Nevil Maskelyne and Harry Houdini.  Podmore’s and Maskelyne’s activities were part of the Victorian Period proper; Price and Houdini built upon such efforts, exposing frauds in the 1920s and ’30s.

Francis Ward Monck:
During a seance in Huddersfield, England, Monck, a Baptist minister-turned-medium, was accused of fraud.  As several men attempted to search him, he escaped through a window.  Several props, such as “spirit hands,” were found among his possessions, and he was eventually caught, arrested, and tried for fraud.  Like Slade, he was found guilty and received a three-month prison sentence.  Back in New York, he opened a healing clinic and was sued numerous times over the years. 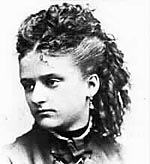 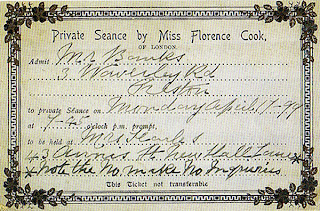 “Volkman bribed himself into the séance by presenting jewellery to Cook and, once the spirit appeared, proceeded to seize her and then hold the ‘spirit’ and declare that she was, in fact, none other than Cook dressed up. Edward Elgie Corner, Cook’s fiancé, assisted by other sitters, swiftly intervened and Katie King escaped back into the cabinet, leaving Volkman with a bloodied and scratched nose. On entering the cabinet (after an unknown elapse of time) Volkman found Cook tied as she had been at the start of the séance, but with her clothes in disarray.” 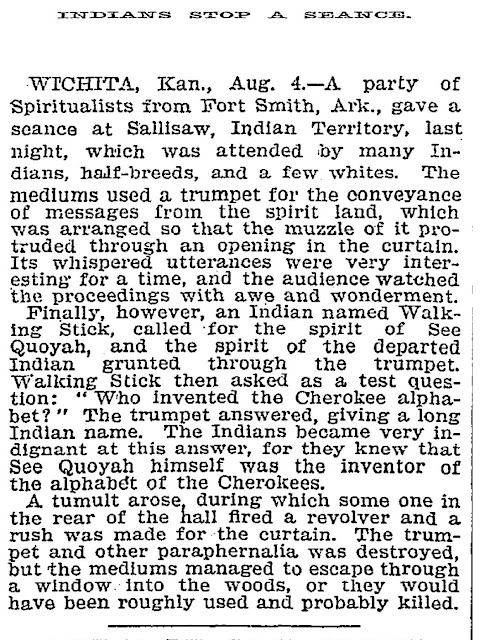 So – what’s next?
Today’s post wraps up the spiritualist series.  Many thanks to the readers and commenters, who have helped spur this along.

What topics would you like to see in the future?  19th century crime, medicine, etiquette, fashion, politics?  I’d love to hear from you.