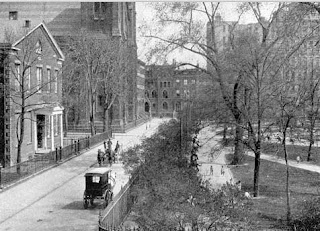 Okay, so you’re an ordinary citizen, making your way in the late-19th century world (specifically the American corner of the world).  Let’s say you’re a cautious and astute person: you keep a tight grip on your wallet or pocket-book in crowds, to the chagrin of those sly pickpockets out there; you don’t fall for those con-artist tricks and hand over your hard-earned money; you’re even good at spotting “funny money,” and won’t accept any currency that looks the slightest bit wrong. Yes sir, you know how to thwart those criminals, and keep yourself and your money safe (check earlier postings for the hazards you’ve just avoided).


The bad news:  you have to sleep sometime.


This week, we’re going to take a look at how 19th century house burglars – “sneak” thieves and “second-story” men – operated, and how people fought back.

The account below, from the 1886 book Professional Criminals of America, describes the need for vigilance against the cunning burglar, who is well-skilled in using tools and false keys (made by less-than-honest locksmiths) to thwart the home-owner’s defenses.  In addition, there is the disturbing notion of the “inside job,” where a trusted servant is actually the criminal’s confederate:

Most of the above account of such “desperate rascals,” with “masks on their faces and murder in their heart,” seems rather alarming.  Notice, however, that toward the end of the paragraph the writer tempers the portrayal: burglars are actually cowardly, and can be easily frightened by “the noise made by rats” – so much so, in fact, that they will abandon their ill-gotten gains and flee.

19th century burglars were audacious, and stupid (nothing ever changes, does it?).  Here are some interesting stories from The New York Times along those lines:

Kind of creepy, huh?  Click this link for the full story.

What’s a poor homeowner to do?
Business in theft deterrents was brisk during this time.  Here’s a locksmith’s ad in Geer’s Hartford phone directory: 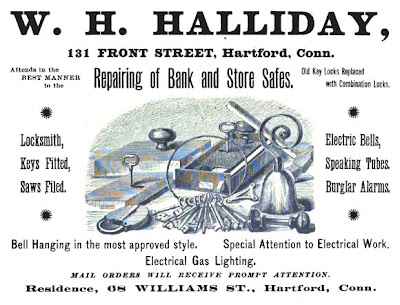 Also, here’s an interesting anti-burglar contraption, called “The Timby Burglar-Proof Sash Lock and Ventilator,” featured in the journal Manufacturer and Builder (1888).  (Not sure how effective it was!) 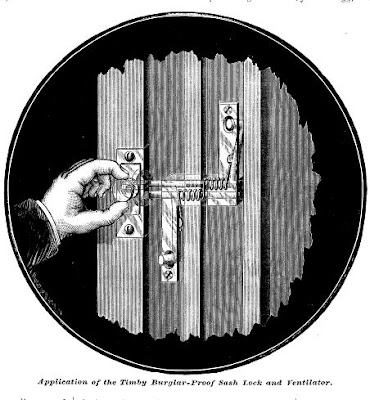 Nothing beats good old-fashioned quick-wittedness, however, and from some surprising sources (let’s hear it for the girls!):

Here’s the full story
Next week:  we’ll return to the more light-hearted aspects of late-19th century life.  What will it be – shopping? restaurants? tourism?  Check back and see!


What would you like to see in future postings?  I’d love to hear from you.