A glimpse into 19thc life: the Seven Sisters

Ahh, Labor Day weekend.  The last gasp of summer leisure.  ALL of the children going back to school.  Parents have been kissing college freshmen goodbye and returning to quieter homes (mostly).  It’s the first weekend of college football, too, when many of us ransack our closets for those college colors to wear, either in front of the tv screen or in the stadium.  This will be the year.  We know it.

It seems fitting, for this end of summer, to revisit an earlier post about one of my favorite subjects, 19th century women’s colleges.  So, in between those burgers and dogs and iced tea, here’s a little taste of your great-grandmother’s college.  Or the college she would have attended if she could.

Sounds like something out of Macbeth, doesn’t it?  It’s simply a term to describe the loose affiliation of seven women’s colleges – Smith, Wellesley, Bryn Mawr, Barnard, Mt. Holyoke, Amherst and Vassar – during the early years and into the 20th century.  These colleges were the cradle, so to speak, for the women’s movement generally and the suffrage movement in particular. (Image at right from etc.usf.edu)

Excerpts below from: Alma Mater: Design and Experience, by H.L. Horowitz

Smith College, regarding Rally Day (sort of a school-spirit day):

The receptions evolved into day-long college events. At the 22nd reception in 1898, “a little dancing was enjoyed,” according to archival resources. From 1890 to 1893, dances took place on the morning of February 22 in the gymnasium, but only square dancing was allowed; the waltz was not officially introduced on campus until the first junior prom in May 1894. Games were added to the day’s events in 1892, and the junior-senior basketball game [yes, the women played basketball in the late 1890s!  Check my earlier post about women’s college basketball] soon became a traditional part of the celebration. Other events included debates, dramatic presentations, singing and dancing.

Sophomores tried to steal freshmen’s caps overnight (and freshmen guarded them) to embarrass the freshmen, who would have to appear “unsuitably clad” in chapel the next morning.

One of the first Lady Principals required students to wear gloves on formal occasions, including events such as reading one’s own essays to college classmates. 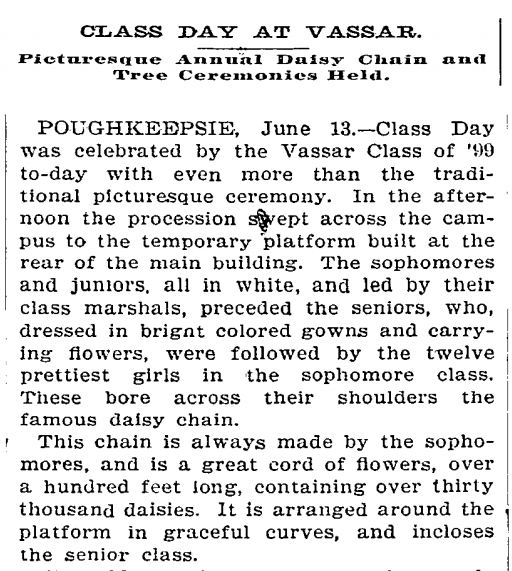 Read the rest of the NYT article here.

Do you have fond memories from college?  What do you think of these early young women, making their way in the world?  I’d love to hear from you.

5 thoughts on “A glimpse into 19thc life: the Seven Sisters”