Hi, everyone!  We’re nearly finished with the book tour, and it’s been a blast.  Thank you all for taking the tour with me, and I hope you’ve enjoyed meeting the fab writers and bloggers along the way.

Karen McFarland and I will get together over at her place on Wed, April 3rd, where I’ll announce the WINNER of the Whodunnit puzzle contest and giveaway.  The winner will get a free ebook copy of my debut novel, Dangerous and Unseemly, and a $25 gift card of his/her choice to either Starbucks, Amazon, or Barnes and Noble!  I’ll email the winner individually, too.

If you missed any of the stops or trivia questions, no worries.  I’ve compiled them all here.

But first, a recap of the puzzle:

You have received a partial telegram, stating that the murdered body of Sir Reginald “Good Riddance” Crenshaw, your long-lost third cousin (twice removed) has been found.  However, the rest of the message has been lost, scattered and garbled along a trail of multiple telegrams to other people by a drunk clerk at the telegraph office.

Before you can make a claim upon dear Reggie’s ill-gotten wealth, you must establish the particulars of the murder.  Where was he found? What was he killed with?  And, most importantly, WHODUNNIT? 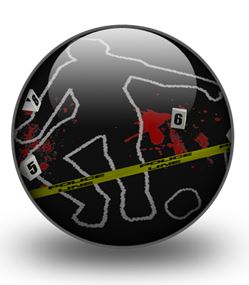 HOW TO SOLVE:  Look at the mystery trivia questions below.  Each correct answer will give you the alphabet letter you need.  You want to solve 3 puzzle pieces: which ROOM, which WEAPON, and which SUSPECT.

Question #1 – One of the following is NOT a rule of Golden Age detective fiction, as famously listed by literary critic Ronald Knox (in a preface to a 1929 collection of detective stories).  Which is it?

Question #2 – What famous fiction private eye said: “The cheaper the crook, the gaudier the patter”?

Question #3 – This detective said:  ”Warning.  Assholes are closer than they appear.”

Question #4 – What percent cocaine solution did Sherlock Holmes inject when bored between cases?

So, was dear old Reggie killed in the…

Clever, aren’t you?  Okay, so now you know where Sir Reggie was dispatched, but what was he killed with?

Question #1 – Nancy Drew had two friends (who were probably jealous of her cool red roadster!) who acted as her sidekicks and assisted in her investigations.  They were:

Question #2 – Nate the Great, a “soft-boiled” kid detective from a popular children’s series, eats a favorite food when he needs to think out a case.  What is it?

Question #3 – What trademark tune does Columbo whistle (beginning with the episode “Any Old Port in the Storm”) which the producers worked into the musical theme?

My oh my, you are a smart one!  How about the biggest mystery of all…WHODUNNIT?

Question #1 – There was a mysterious incident in Agatha Christie’s life.  In her early adulthood, she:

Question #2 – Who were the smartest of the Scooby-Doo gang?

Question #3 – Sherlock Holmes is partly modeled after a person in Sir Arthur Conan Doyle’s life.  His name was:

Question #4 – Jessica Fletcher, a mystery writer/amateur detective on the long-running Murder, She Wrote, lived in which town (whose per capita murder rate would have been the despair of local real estate agents)?

Colonel Mustard (MUST): did the upstanding retired army man do the dastardly deed?

Mr. Green (GREE): who is really behind that colorful exterior?

Professor Plum (PLUM): perhaps the professor is the passionate perpetrator.

Mrs. Peacock (PEAC): who knows if poor old Reggie ruffled that lady’s feathers, and she committed murder most foul?

Think you have the answer?  Drop me a line!  Send an email with your answers to kbowen (at) gmail (dot) com.  Heck, email me even if you get lost and/or don’t have time to figure it out.  This is all just for fun, after all.  I’d love to hear from you, and I’ll put you in the drawing, too!

1 thought on “A “Whodunnit” Recap”

FabOoolous…Tiffany White is hosting me today!
Why it ROCKS to talk to 6th graders about novel-writing
©2022 K.B. Owen, mystery writer— All Rights Reserved
website by Memphis McKay