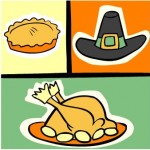 I’m sure most of you are aware that Thanksgiving this year falls on the latest date it can possibly be, much to the hand-wringing dismay of Christmas retailers.  And we’ve all been getting the “early Black Friday” emails and advertisements to prove it.

Have you ever noticed that when life gets hectic, traffic gets heavy, commercialism becomes more intrusive than usual, and patience wears thin – as often happens around the holidays – that we hanker for an “old-fashioned” version of the holiday?  I know I do.

So what would an old-fashioned Thanksgiving be like?  Most of us draw upon childhood memories in constructing that image.  (And of course as kiddos we didn’t have to worry about cooking, cleaning, or Uncle Fred’s antics after having a few too many).  We envision a slower pace, simple fare, family around us, catching our breaths, and being thankful.

Being the history  dilettante that I am, when I think “old-fashioned” I think of “old.”  So naturally I looked up early-twentieth century newspaper articles to share with you.

I think what will surprise you most is what we have in common with the people of those days in preparing for and celebrating Thanksgiving.  Yep – food, football, and shopping!  Today we’ll focus on the shopping, and then the next two Tuesdays we’ll talk about football and food.

Retailers from a hundred years ago were just as eager to entice holiday shoppers as they are today.  And they used the same tactics:  the SALE and the GIVEAWAY.

In this advertisement from the East Oregonian (Evening Edition), November 18, 1910, there are choices aplenty for budget-conscious shoppers:

Notice the food portion of the advertisement is just a teeny paragraph on the lower left side?  I was surprised it wasn’t more prominent.  In fact, it was similar in size to the Children’s Underwear section.

Quick!  All of Johnny’s tighty-whities have holes in them, and Grandma’s coming over!

But what’s with the bear skin?  Is that really what folks back then were running out to buy right before the Thanksgiving feast?

(Burt Reynolds may come to mind for some of us.  For you youngsters, if you Google “Burt Reynolds bear skin” you’ll see what I’m talking about).

Even today, stores like to give away freebies to draw in shoppers.  What’s the best freebie at Thanksgiving time?  The turkey, of course.  According to this advertisement, Wentworth Clothing House made it a tradition:

After all, who can resist a free turkey?

Speaking of giving away free turkeys, I’d like to leave you with a clip from WKRP in Cincinnati.  I think you’ll get a kick out of it!

Until next time, keep those turkeys grounded.

19 thoughts on “An Old-Fashioned Thanksgiving?”