I’m so happy to announce the release of the next Concordia mystery.

It seems that, no matter where the lady professor may go, trouble is sure to follow. Not even wedded bliss can stop our intrepid Concordia from getting involved in something dangerous… 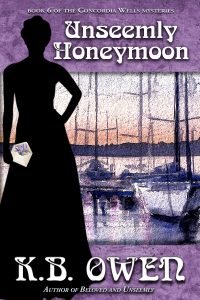 When a killer crashes the honeymoon, three’s a crowd…

It’s the summer of 1899, and Professor Concordia Wells—now Mrs. David Bradley—eagerly anticipates their honeymoon in the Hamptons. She has one errand along the way, to visit a former student seeking advice. About a love interest, no doubt.

If only it were that benign. The young lady, now employed as a switchboard operator, inadvertently eavesdropped on a murder plot involving the high finance world of the Stock Exchange Luncheon Club. How to notify the police without losing her position? Before Concordia can think of something, the girl is murdered.

Without proof, the police give little credence to second-hand conspiracy tales. David convinces Concordia to leave the matter to the authorities and go on with their honeymoon. Little do they know that trouble will follow them to their peaceful getaway, and entangle them in secrets and long-standing grudges until they are fighting for their very lives. “’Til death do us part” may happen sooner than the couple ever imagined.

Just in time for your holiday relaxation, curled up in a cozy chair on a wintry afternoon! *wink*

I know many of you enjoy the background research behind my books. While writing Unseemly Honeymoon, I needed all sorts of info: 1899 telephone operations, turn-of-the-century honeymoon customs and behaviors, the terrain of the Hamptons area of Long Island, the system of jurisprudence in Suffolk County, and the Long Island RR in 1899 – it’s stops, platforms, and schedules. And then there’s 1899 baseball, yachting, hotels, and theatre performances. Fun stuff! I’ll probably be developing some of these as more extensive blog posts down the road. But for now, here are a few fun little facts that I picked up along the way:

I love my job.

So, that’s the big news around here! Thanks to everyone for your support, and best wishes for a wonderful holiday season, no matter how or what you celebrate.

The Last Mystery of Edgar Allan Poe
My go-to research tools, and giveaways for you!
©2023 K.B. Owen, mystery writer— All Rights Reserved
website by Memphis McKay