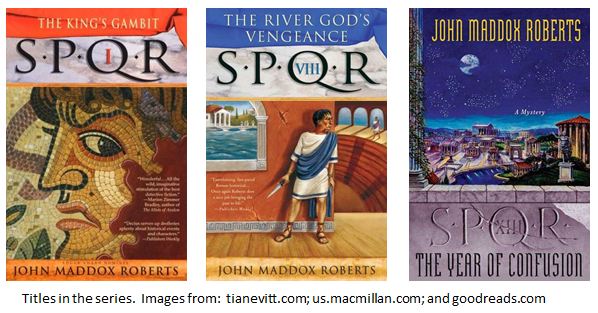 Some interesting facts about John Maddox Roberts and the SPQR series:

1.  Roberts served in Vietnam as a Green Beret.  He decided to take up writing because “it looked easy and was something I could do indoors.”

2.  Roberts has written more than 45 books, in science fiction/fantasy, historical, historical mystery, and noir mystery.  SPQR is probably his best-known and followed series, with 13 books so far, but he also has a strong fan following for his 8-book contribution to the Conan books.

3.  Roberts’ background in anthropology/archaeology serves him well in this series, with a rich level of detail about day-to-day life, politics, and ethics in Ancient Rome.

4.  SPQR is the Latin initialed abbreviation for “Senatus Populusque Romanus” –  “The Senate and People of Rome” – the republic’s official designation.  Decius recounts his adventures in flashback form, when he’s older, at the time of Octavian’s reign.

1.  The puzzles themselves are cleverly done (always satisfying to a mystery reader).

2.  Decius is shrewd, politically savvy, but not a keester-kisser.

3.  He has a knack for finding trouble (or trouble finding him).  One enemy in particular, Clodius, keeps showing up and trying to kill him.  Clodius is not a particularly clever, Moriarty-like villian; he’s more like a thug, but the timing is always bad, and complicates whatever Decius’s particular problem is at the time.

4.  Decius is tough in a fight, and his ingenuity often saves his life.

5.  In my personal opinion, the protagonist’s best feature is his wise-cracking, sarcastic narration.  Here are two examples, from the short story “Mightier than the Sword”:

Can you match the nemesis for each detective/spy?  (Again, I’m throwing in an extra choice to challenge you!)

Hope you’re getting a kick out of the quizzes.  Have you read the SPQR series?  Are you interested in stories set in Ancient Rome?  I’d love to hear from you.

8 thoughts on “Decius Caecilius Metellus the Younger, Master of Mystery”