Welcome to Masters of Mystery, an ongoing series which features a fictional detective and examines his or her unique contribution to mystery fiction.  This month: 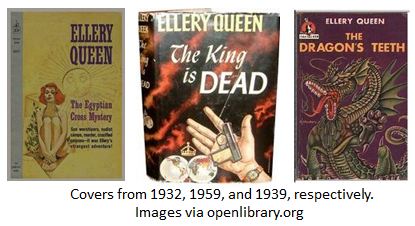 Some interesting facts about Ellery Queen and his creators:

1. Ellery Queen is both the name of the fictional detective and the nom de plume for the writing team of Frederic Dannay and Manfred Bennington Lee.  They were cousins from Brooklyn, NY.

2. Dannay and Lee wrote the first Ellery Queen novel for a “Best First Mystery Novel” contest in McClure’s Magazine.  Although they won, the magazine changed owners (or sponsors, according to one site), with the first place prize going to a different contestant (I don’t think that would fly in our day and age, do you?).

3. Obviously, that little setback didn’t stop them: the Ellery Queen canon of novels and short stories is immense, spanning forty-two years, from The Roman Hat Mystery (1929) to A Fine and Private Place (1971), with more than three dozen novels, and innumerable short stories and radio scripts.

4. The series popularity prompted the founding of The Ellery Queen Mystery Magazine in 1941, a mystery short fiction magazine which has been in print ever since (making it the longest-running mystery fiction magazine ever).  The publication features some of the best mystery writers around, including Ed Hoch, Ruth Rendell, Jeffery Deaver, and Peter Lovesey, among others.

2. Ellery is a Harvard-trained, rather snobbish, ratiocinative amateur detective.  He “dabbles” in amateur detection.  He is the kind of eccentric that Golden Age mystery fans came to expect of their detective hero.  While he is of independent means, he writes novels and edits a fiction magazine.  He’s a bachelor and lives with his dad, Richard Queen, a down-to-earth former New York City police inspector.  The father keeps the son in the real world, and affords him contacts within the NYPD that the son ordinarily wouldn’t have had.  So we get the best of both worlds: amateur and professional, the wealthy of the East Side contrasted with the bums of the Bowery.

3. During the course of the novels, Ellery becomes more humanized and develops more heart, to the point of doubting himself in some of the stories, falling in love, and quitting detection (temporarily).  This is one of the benefits of a long-standing series.  Another is that it provides ample material for the detective to cross over to other media.

Beyond print –  Ellery Queen on radio, film and television:

So, have you read any Ellery Queen?  What about Golden Age mystery fiction generally? I’d love to hear from you!