Welcome to Fashion Friday, where we take a look at an item or aspect of 19th century fashion.  I haven’t done one of these in a while, but Jenny Hansen’s recent celebration of National Underwear Day set off a flurry of “undie” posts by fab writers August McLaughlin, Natalie Hartford, and Julie Glover, so here’s my contribution to the “undie” blogging celebration, 19th century style.

And of course, we have to talk about corsets, since it’s the most widely-recognized historical undergarment for women.

What associations come to mind when you think of corsets? 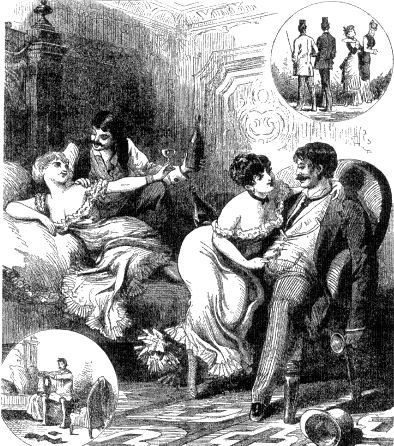 Although the corset wasn’t invented in the 19th century – it goes back at least as far as the Renaissance – we still associate it with that time period.

To say that it was uncomfortable would be an understatement.  Women were known to faint during a tight lacing session; it inhibited movement, even comfortable sitting.  However, only a small number of 19th century contemporaries were sounding the alarm about this particular female undergarment.  In the mid-19th century, corsets were still considered important to female health and good posture.  In fact, many corset products were named a “health corset.”  Some in the medical community deemed it imperative that a woman be properly supported, and prevailing opinion held that a woman’s posture, and therefore her internal organs, might otherwise suffer.

There were even maternity corsets:

Of course, once a woman had worn a corset for most of her life, the muscles in her back and abdomen would become weakened from lack of use.  Then it’s a self-fulfilling prophecy: she truly does need a corset for support.

A Short History of the Corset

The Corset Trade in the Later 19th century (an interesting economic angle regarding the use of corsets).

So, what do you see currently being done for the sake of beauty today, to the detriment of women’s (or men’s) health?  Was there any fashion discomfort you put up with when you were younger that no one could pay you enough to revisit now?  I’d love to hear from you!

Hang on to those undies,