Today’s flashback looks at a popular phenomenon of the late-19th and early-20th centuries, the “Gibson Girl.”

She was the creation of artist Charles Dana Gibson (for a detailed biography, click here), and she was everywhere:  in the magazines of Life, Collier’s Weekly, Harper’s, and Scribner’s, to name the major ones. Her look was iconic, and quickly reached beyond the confines of magazine pages, to appear on china plates, spoon medallions, screens, fans, and even wallpaper (for bachelor quarters, according to one source).  People would trace and embroider her image on handkerchiefs, too.  In terms of her influence on society’s image of women, the Gibson Girl (she had no actual name) has been likened to Barbie, with the two bracketing the beginning and end of the 20th century.  (Click here for more on this thread).

The American public was ready for an icon of feminine beauty, charm and accomplishment.  Before the appearance of the Gibson Girl, there had been no real defining image of what constituted the ideal American woman.  She was a rather nondescript entity.

But by the turn of the century, American women were taking on more of an influential role in society and their own destiny – some attending college, participating in sports and other physical activities such as bicycling, leading political rallies, founding charitable organizations.  Middle class women in particular had time-saving household conveniences, which afforded them increased leisure to read magazines, shop, travel to the seashore, attend concerts, and so on.  They became more of a fixture in public life than ever before.

What was the Gibson Girl like? Besides being a tall, slender beauty with luxuriant hair (loosely upswept into a topknot – as if it could come loose at any moment, but doesn’t), and a corset-aided hourglass figure, the Gibson Girl exuded confidence.  Golfing, studying, flirting, engaging in hobbies – she performed all with equal parts ease and grace.  No wonder most American women of the time sought to emulate her, in both dress and demeanor.  Gibson himself called her “the American girl to all the world” (http://www.gibson-girls.com/gibson-3.html).   Life described it this way, in 1894:

“Mr. Gibson has a great responsibility on his shoulders, and if he once fully realizes it, it will keep him awake nights. I wonder if he knows that there are thousands of American girls, from Oshkosh to Key West, who are trying to live up to the standard of his girls.” (source: http://indiainkelephant.wordpress.com/2010/12/31/friday-ephemera-its-a-bird-its-a-plane-its-gibson-girl/) 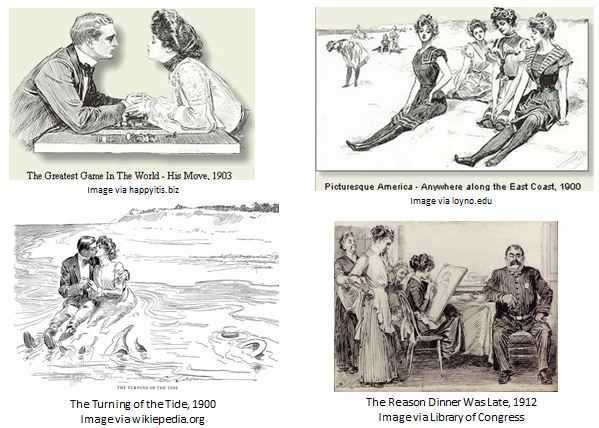 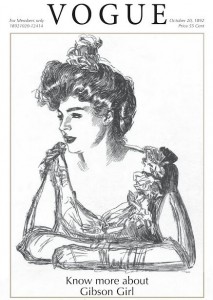 Want to learn more about the Gibson Girl?

American Beauties: Drawings from the Golden Age of Illustration (Library of Congress)

What is the Appeal of the Gibson Girl? by Elizabeth Camden, author

The Gibson Girl: the Ideal Woman of the Early 1900s (EyeWitnesstoHistory.com)

What do you think of the Gibson Girl?  Are there any ideals of feminine beauty and character today which resonate in our culture?  I’d love to hear from you!

Tuesday Terrific: Wisdom on Walls
“Coming in like a lion” for ROW80
©2022 K.B. Owen, mystery writer— All Rights Reserved
website by Memphis McKay