Today I’m re-posting an item you might find interesting.  Have a great weekend!

Today, we’re talking about toilets.  As a 19th century mystery writer, I need as much information as I can get.  Don’t worry, I’m not about to go into the bathroom habits of my characters in my book (or here); I happened to be looking for a comedic moment, so hey, bathroom humor!  That’s when I realized how little I knew about the American 19thc bathroom.  The beauty of it is, when I find cool stuff, I get to pass it along here.

Up until the invention of the flush toilet (the first American patent was granted in 1857, although there were other versions out there before that), there were two civilized options when you had to go:  the chamber pot (generally for middle-of-the-night and sickroom use) and the outdoor privy/outhouse.  There were problems with both methods:  the chamber pot required emptying (usually into the street or outdoor drain), and the privy was typically latrine-style, where a deep hole was dug, which would eventually fill up, and then a new one had to be dug.  Also with the privy, the noxious gas backed up and became quite unpleasant, despite the lime and other materials used to dissipate the odor.  In addition, substances could seep into the household’s well water if the placement was ill-considered.

Toilets and the dreaded “sewer gas”:

The indoor flush toilet grew in popularity from the 1870s, when most cities had the sewer systems to support them.   The urban environment, in fact, is what created the necessity of the indoor toilet:  apartment dwellings and tenements were multi-storied, and new buildings were only getting taller.  Climbing down multiple flights of stairs to outhouses outside the buildings’ ground floor was highly impractical.  It was also easier from a waste water management point of view, so that slops and offal weren’t discarded in the street, to mix with rainwater and run into the rivers and streams and spread disease.

However, some physicians and health officials worried about indoor toilets, specifically the problem of sewer gas, which could backup into the toilet’s drain pipe.   Here’s an excerpt from an 1898 article on “Home Sanitation” by Louise Harvey, M.D.:

“To the drainage of the house too much attention cannot be paid. The plumbing is best placed entirely outside of the main part of the house, and separated from it by an air space into which the sunshine and air have free access…. Many people are obliged to live in houses where the lavatories are enclosed in the main part of the house, or, as Dr Price puts it, “in enlarged water-closets.” To these people we would say that much may be done to obviate their contaminative influence, first by keeping the plumbing in perfect condition; second, by keeping the bowls and traps clean, and third, by ventilation….”  Western Journal of Medicine, “The Insidious Foe – sewer gas”

Inventors fiddled with various designs to overcome the problem of sewer gas entering the home.  It was Thomas Crapper (I kid you not; you’ve probably heard of him) who finally solved the problem with the “U” shaped trap in 1880.  The water in the trap created a seal to keep the sewer gases out.   (You see, however, that the physician quoted above, writing in 1898, was still worried about it).  Image below from theplumber.com 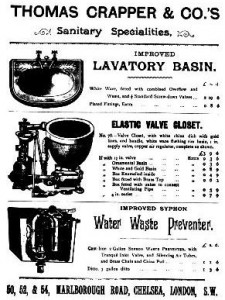 The prevalence of the flushable toilet brought about another phenomenon:  toilet paper.  In the old days, sitting on a seat connected to a hole in the ground in the backyard meant that leaves, corncobs, moss, newspaper, the Sears Roebuck catalog, etc, were good candidates for cleaning up.  The idea of paying for a product to wipe one’s bum and throw into a hole along with the rest of the mess seemed the height of absurdity.  After all, old catalog pages one can get for free.

Folks quickly learned, however, that these substances don’t flush down the drain pipe very well.  Thus, toilet paper became a necessity not so much because it was cleaner to use on oneself (a claim the early manufacturers had tried to make without much success), but because it wouldn’t clog the pipes.  People listened to their plumber more than their doctor, apparently.  For more on the history of toilet paper, check out “Toilet Paper: how America Convinced the World to Wipe.”

Inventions of the Ragtime Era

The History of Toilets

So what modern invention do you appreciate most?  I’d love to hear from you.