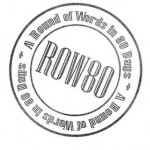 Hmm, it was hard to come up with a ROW80 theme this week.  We have President’s Day (grade-school children in tall hats and fake beards, reading patriotic poetry), Mardi Gras (wild, bead-throwing, it-stays-in-Vegas revelry), and for some of us, Lent (religious, penitent, swearing off – gasp! – chocolate).

Then I remembered…Fasnacht Day, originally a Pennsylvania Dutch tradition.  It is celebrated the day before Ash Wednesday (the same day as Fat Tuesday, aka Mardi Gras).  A fasnacht is a deep-fried (in lard) pastry, like a donut, often dusted with sugar.  The fasnacht tradition has sort of merged with the Polish paczki (a donut filled with jelly that was traditionally eaten the week before Lent), and so fasnachts are often filled with creme or jelly now, too.

Perfect theme, I’m thinking.  Who doesn’t love a donut?  Or even better, an excuse to eat one?  World unity through donuts.

Good thing “not eating donuts” isn’t part of my goals.  But how did I do this week?

My husband Paul and I co-wrote a Valentine’s Day post about “foibles,” where we got to expound upon each other’s little…well, let’s call them “eccentricities.”  It seemed to strike a chord with a lot of folks, who enjoyed the mutual teasing we shared.  Friday was a quick re-posting of 19th century indoor toilets.  I was writing a  post about Conan Doyle’s The Hound of the Baskervilles, but WordPress stopped cooperating and I lost material, grrr.  I’ll post that this Friday instead.

I spent the first part of last week revising and expanding upon my antagonist’s profile for my WWBC group.  He just wasn’t enough of a bad boy, so I bumped up his personality a few more notches on the Mean-O-Meter, and upped his street cred by having him kill a couple more people.  I love my work.

While Piper reviews the profile, I spent the rest of the week using post-Its and a story board to arrange my scenes for the other novel I’m working on, Unseemly Pursuits.  So those cats have been herded (mostly).  It’s not complete, but I need to start writing and let the process itself open up new possibilities.  That’s always a tough leap for me; I want it to be totally plotted out ahead of time, but I end up changing it along the way, anyway.

Balancing writing and social media is definitely going more smoothly these days.  Used to be I just …couldn’t …resist …checking my email …must …read …her blog post …now!  But I’m able to set them aside for times when I come up for air during writing sessions, or before/after writing.  What a lot of fab bloggers and writers there are out in the blogosphere!

This week was about the same as last week: I got one dedicated walk, and ran up and down stairs on several days.  Also, I don’t know if it counts, but I took the youngest and his friend to an indoor pool/mini-waterpark yesterday afternoon and did some swimming.  It didn’t seem like much at the time, but I slept like a rock last night!  The goal to exercise more consistently continues to elude me.  Sigh.  I really need a walking buddy or a destination, like Jenny Hansen is doing.  Go Jenny!

So how are my fellow ROWers doing!  Hope all of you have had a great week!  Hope you get to enjoy a donut!