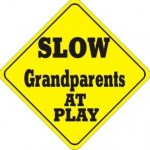 Yesterday (the second Sunday of September) was National Grandparents’ Day, first celebrated officially in 1978, when the proclamation was signed by President Jimmy Carter. We’re a little late, but grandparents are so awesome that I think they deserve an extra day of celebration, don’t you? 😉

Sadly, none of my grandparents are still living, but I was fortunate enough to grow up with a wonderful grandfather who lived nearby. Grandpop certainly had his own style, driving a Chevy Nova of army-staff-car-green that he called Betsy (he talked to it often), telling goofy knock-knock jokes and rhymes, and sharing his stories of working in the coal mines in upstate Pennsylvania.

One of his many peccadilloes was an aversion to ringing the doorbell when he arrived at our house. Instead, he would get out of his car and just start wandering around the front or back yard until someone noticed his car had pulled up or spotted him through a window and invited him in.

Both my parents worked long hours, so he and I spent a lot of time together over the years. When I was 18, he lost his battle with lung cancer, the result of miner’s black lung and a lifetime of smoking unfiltered Camels. I miss him still.

Now that I’m a mom, I get to watch my own Mom and Dad play the role of grandparents to my kids. Both they and my husband’s parents have been awesome grandparents for our boys, though we lost my mother-in-law much too soon.

What are your fondest memories of your grandparents? I’d love to hear from you!

P.S. – for more about grandparents, check out my post on Top 10 Reasons Why Grandparents Rock. I wrote it a few years ago (and talk about my grandpop there, too – you can skip that part), but the reasons still hold true today!