Only 28 more days until NaNoWriMo!

“NaNoWriMo,” short for “National Novel Writing Month,” takes place from November 1st-30th.  The concept comes from Chris Baty’s book No Plot?  No Problem:  A Low-Stress, High-Velocity Guide to Writing a Novel in 30 Days.

By writing a 50,000-word novel on the fly, in the midst of busy lives, the writers who make this commitment squeeze in the time any way they can, fearlessly plowing through both word-counts and bags of Sour Patch Kids.  The goals are many and varied, but the general upshot is that would-be novelists overcome their hesitation about taking on the daunting task of starting a novel, and fulfill the dream of having written a book.  A lot of preconceptions about writing get blown away, too. 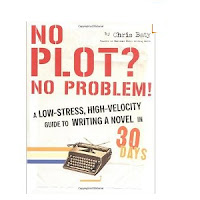 Why November, you ask?  According to the author who started this self-professed craziness (originally in July of 1999 before later moving the annual event to November), the weather is miserable, and the holidays haven’t really gotten going yet (I assume NaNoWriMo-ers take time off to eat some turkey).  Hey, and it doesn’t hurt to be able to tell the relatives you only see every December that you’ve completed a novel.  During the month of October, many NaNoWriMo-ers gear up for the writing siege to come, stocking up on snacks, caffeinated beverages, scoping out late-night coffee shops with an abundance of electrical outlets, hugging their children, etc.

In addition to Baty’s book, which is an inspirational resource and a great place to start, NaNoWriMo has a website (included below), with all sorts of helpful tips and group support/mutual lamentation.

Stay tuned to further posts this month regarding some of Chris Baty’s unusual perspectives/ approaches to the writing process, such as “No Plot? No Problem!” (his book title) and the writer’s “Two Magna Cartas.”

So who’s planning to participate in National Novel Writing Month this year?  I’d also love to hear from those who have done NaNoWriMo in the past.  What was your experience?