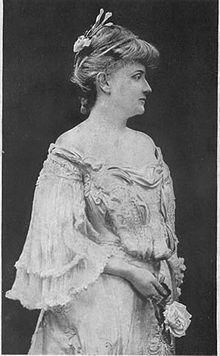 The Californians, published in 1898, was my first introduction to Gertrude Atherton. The novel is creepy. The novel is gothic. And the novel was scandalous when first published.

Gertrude was born on October 30, 1857, in San Francisco. Childhood finances were sketchy after her parents divorced. She shocked everyone by marrying at 19 into the wealthy Atherton family. What was so shocking? The man had actually come to court her mother.

But Gertrude was known for shocking people, and developed a reputation for delightful nastiness. When her friend Ambrose Bierce tried to kiss her, she rebuffed him and then laughed about the incident at parties. Perhaps feeling some professional jealousy, she spread the rumor that Edith Wharton hadn’t actually written The House of Mirth. And she passed up a chance to meet Oscar Wilde; she didn’t like his looks.

Gertrude had two children by her husband, George – the son died at an early age. In 1882, Gertrude anonymously published The Randolph’s of the Redwoods, a scandalous tell-all based on local California families. Her own family was embarrassed – not only because of the exposure of their neighbors’ secrets, but because of the independence and sexuality of the heroine. Gertrude was an early feminist.

Her husband died in 1887 on a solo trip to Chile (rumor had it he was trying to escape Gertrude). But widowhood freed her. She moved to New York and pursued a writing career.

And she was a career writer, make no mistake. She networked, taught herself the publishing industry and wrote, wrote, wrote. Over the course of her life, she published dozens of novels, novellas, articles and short stories – mysteries, gothics, biographies and social commentaries.

Wasn’t that cool?  Gertrude sounds like a spunky gal who would be fun to know.  But let’s find out more about Kirsten! 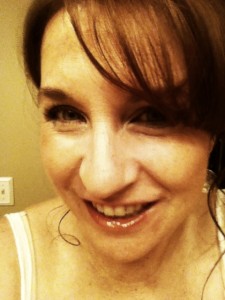 Kirsten Weiss is the author of the Riga Hayworth series of paranormal mysteries: the urban fantasy,The Metaphysical Detective, The Alchemical Detective, and The Shamanic Detective.  The fourth book in the series, The Infernal Detective, will be available on Amazon May 21st.

Kirsten worked overseas for nearly fourteen years, in the fringes of the former USSR and deep in the Afghan war zone.  Her experiences abroad not only gave her glimpses into the darker side of human nature, but also sparked an interest in the effects of mysticism and mythology, and how both are woven into our daily lives.

Now based in San Mateo, CA, she writes paranormal mysteries, blending her experiences and imagination to create a vivid world of magic and mayhem.

Here’s a teaser about Kirsten’s soon-to-be-released mystery, The Infernal Detective: 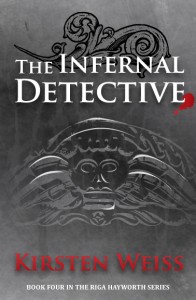 When Riga Hayworth finds a dead body in her bedroom a week before her wedding, it’s par for the course. When the corpse drives off with her fiancée… That’s a problem.
Riga knows dead. More intimately than she’d like. So when a murdered photographer gets up and walks away, she’s believes there’s necromancy afoot. And when she discovers that several of her wedding guests are under the influence of dark magic, she’s certain. But how can she catch a killer and stop a necromancer when even her nearest and dearest are lying to her?

check out the cool book trailer for The Infernal Detective:

The book trailer (above) is the gateway to an alternate reality game – a virtual “novella” in the world of The Infernal Detective – which leads players through character blogs and a Pinterest board.  Hidden in the game’s text are links to stories within stories, and a quest for a “junk oracle.” The first fifty players to solve the game and report in to the author will receive an advance electronic copy of The Infernal Detective for Kindle, Nook, or Kobo.

Sounds like fun, right?  And be sure to check out The Infernal Detective – I’ve read it, and it’s just a terrific blend of mystery, noir, and paranormal…I know you’ll love it!

Kirsten, thanks so much for stopping by!  Let me see that book trailer again…time to test my observational abilities. 😉

What do a crockpot, a mad bluebird, and Earl Grey have in common?
What to get Mom: pole-dancing lessons??
©2022 K.B. Owen, mystery writer— All Rights Reserved
website by Memphis McKay