What do a crockpot, a mad bluebird, and Earl Grey have in common?

Sounds like a bad riddle, doesn’t it?  For me, they were the Fab Triumvirate of items that kept me sane during the past two weeks, while I was speed-writing with a group of fellow first-draft writers.  We were writing the “Emotion Draft” – a program put together by the multi-talented Rachel Funk Heller, who designed and mentored us through the process.

I’ll have to let her post about it, because she can explain it better, but the basic goal was to get as many words down in each day (for twelve days) as we could, keeping in mind the characters’ emotional responses to the events we had plotted, and tapping into our Adaptive Subconscious without our Inner Critic getting in the way and slowing us down.  (We’re going to edit it later anyway, right?).  I got to nearly the halfway point in my rough draft doing this.  Yay!  Book three of Concordia’s escapades is on its way to becoming a reality. 😉

During my intensive writing sessions, I turned to these: 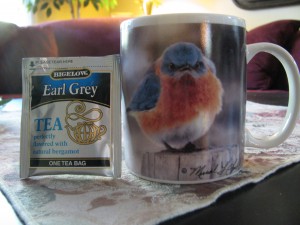 …Earl Grey tea, because that’s my absolute favorite, fragrant tea – and the jolt of caffeine doesn’t hurt, either – and my “mad bluebird” mug, because looking at something that’s cute and grumpy at the same time cheers me up.  Kids are good for that, too, by the way.  Just sayin’…

Planning ahead for those busy days helped, too, especially the meals.  What?  The family wants to be fed…again?

Below is one of my favorite crockpot recipes, originally from my mom (*waves hi*).  It was the first recipe on my plan-ahead list.  When it’s added to rice, it can feed a family of four through at least three nights, with some left over for a couple of lunch servings.  It freezes well, too, and since we really didn’t want the same meal for three or four nights in a row, I divided the end product and froze half of it for the second week.  I don’t know about you, but having leftovers to turn to feels like money in the bank.  Love that warm, fuzzy feeling of security.

So, here’s the recipe…hope you enjoy it as much as we do! 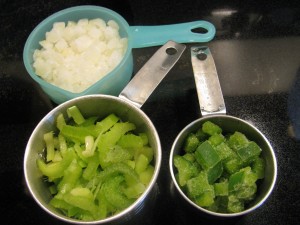 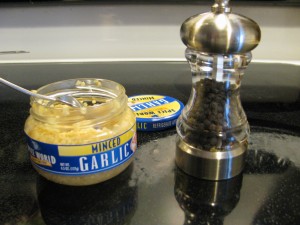 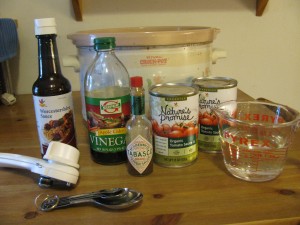 *I use already chopped veggies from the supermarket’s salad bar, or the freezer section.

3.5 lb eye round or rump roast (I used two small ones, adding up to about 4 lbs)

2 or more cloves of garlic, minced (I use the already-minced stuff in the jar.  See a theme here?)

1. Mix veggies together, and spread half of the mixture in the bottom of crockpot.  Set the other half aside for the moment. 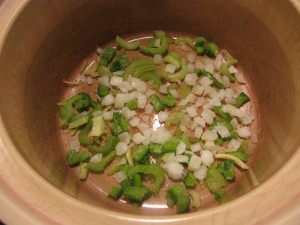 2. Season roast(s) with garlic and black pepper.  I just use a fork; it’s awkward no matter how you do it.  Don’t worry if some garlic falls off. 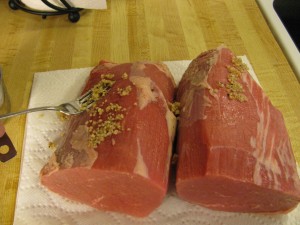 3.  Sear roast(s) on all sides in a heated pan or skillet with a little oil, until they look something like this: 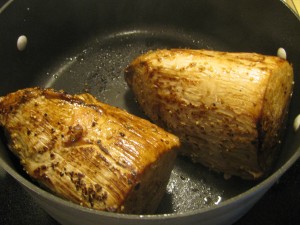 4. Then plunk those little cuties in the crockpot, on top of the veggies. 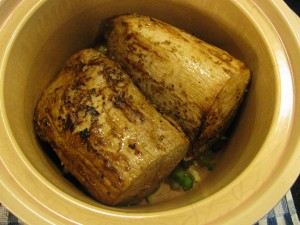 5. Put the rest of the veggie mixture on top of the roast(s). 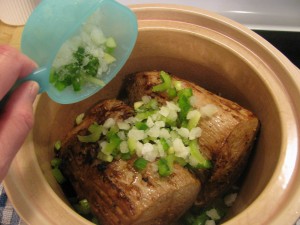 6. Pour all of the liquid ingredients on top of that (no need to mix them; just splash them in): 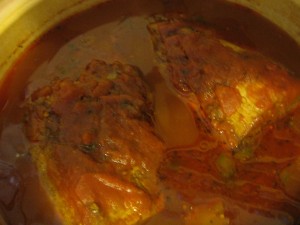 7. Cover and set on HIGH for 6-8 hours.  The house will smell soooo good.  Be prepared for major stomach-rumbling.

8.  Then, it’s time to shred!  What I like to do is spoon the liquid into a separate receptacle temporarily, then use two forks to pull the meat apart right in the crockpot, like this:

9. Pour the liquid back in, stir, and serve over rice or noodles. 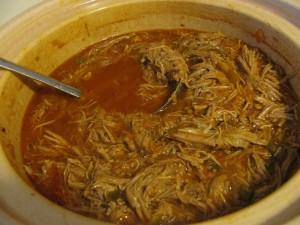 What recipe do you turn to when you know you have a busy week ahead?  I’d love to hear from you.

27 thoughts on “What do a crockpot, a mad bluebird, and Earl Grey have in common?”