Picking up from two weeks ago when Ralph McInerny’s Father Dowling was featured, we’re resuming our examination of the “clergy” detectives – priests, nuns, monks, rabbis – who act as amateur sleuths.  If you think about it, it’s a great gig:  he/she not only catches the crooks, but can save their souls, too! 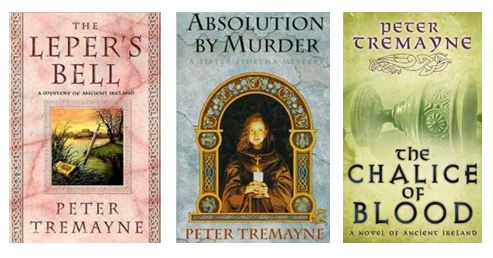 Some interesting facts about Peter Tremayne and the Sister Fidelma series:

1.  The series is set in 7th century Ireland, a place of rival clan territories and five province kingdoms.

2.  British writer Peter Beresford Ellis, writing under the name Peter Tremayne for this series, is a Celtic scholar and has lectured and written over 30 non-fiction books, most of them about Ancient Ireland.  He had also written two historical novels before the Sister Fidelma series.

3.  A combination of circumstances in the mid-1980s gave him the idea:  first, there was the success of Umberto Eco’s The Name of the Rose, featuring a series of murders in a 14th century monastery (and the film that followed starred Sean Connery, the hottest monk to wear a tunic – ever); then there was the popularity of Ellis Peters’ Brother Cadfael series.  Also during this time, Tremayne was lecturing at Toronto University on the role of women in the ancient Irish world when a student suggested it would be a great setting for a murder mystery, with a woman lawyer from the period.  After the idea percolated a bit, he started writing.

4.  The series began in the mid-1990s as short stories (of which there are now more than 80), and a year later, the first of the novels was published, Absolution by Murder. The 21st book in the series, Chalice of Blood, was published in 2010.

1.  Sister Fidelma, from the religious community of St. Brigid of Kildare, is also a dalaigh (an advocate title in the Irish ancient courts of law).  Very few women achieved this status, which required an extensive study of criminal law, and it gives her certain authority and status, which come in handy.  She is sort of an ancient Irish Perry Mason.

2.  This is one nun who hasn’t taken a vow of silence and uses her sharp tongue to quell upstart men who think she doesn’t know what she’s talking about because she’s a woman.

3.  Unlike a cloistered nun, Sister Fidelma travels extensively and consults with kings.

4.  She is smart, of course, but also doesn’t blanch at the sight of blood.  And there can be plenty!

Match the side-kicks/associates with the detectives:

Match the detective with the actor who portrayed him in television/film:

Hope you’re enjoying the quizzes.  Are you familiar with the Sister Fidelma books?  Do you have a favorite historical mystery series?  We’d love to hear from you.

One parting thought:  what’s the dark side of the cleric:  the devil, right?  This Tuesday, check out the #DevilColony launch party on Twitter!  It’s all to celebrate the debut of James Rollins’ new Sigma Force book, The Devil Colony. Visit Jenny Hansen‘s fabulous blog for the latest on the hot celebration plans, including themed snacks, music, and more!  In her post, she has a mash-up of other primo bloggers who are spicing up the party.  You don’t want to miss this!