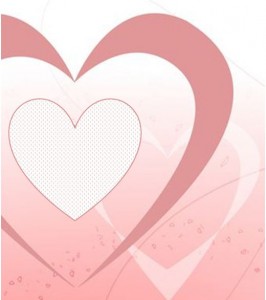 Hubby and I have been married a while now (27 years and counting), so we’ve seen a lot of Valentine’s Days come and go. For us, the occasion is usually marked by wine, chocolate, and me not cooking. Winning!

It’s also a great occasion to reflect on relationships. With that in mind, I’m re-posting a piece that Paul and I co-wrote 5 years ago when, in honor of Valentine’s Day, we commented upon one another’s “eccentricities.” (My updates/new commentary in RED).  Enjoy!

“Foible” is defined as “a minor weakness or eccentricity in one’s character.”  Sometimes foibles can be the death of relationships; however, in other instances, they are what lend interest and individuality.

To celebrate foibles “up close” in all their quirky glory, we’re approaching today’s blog post a little differently:  hubby and I are going to discuss each other’s foibles.  Yep, I’m going to point out his “eccentricities” and he’s going to point out mine!  Let’s hope we make it to Valentine’s Day next year, LOL.

My description of Paul:

Paul enjoys what he himself terms “geeky” pursuits.  He loves boardgaming and math – whether it’s Age of Renaissance or Fractals, he shows equal enthusiasm.  He has me playing a lot of these boardgames now, too, and he designed one of his own that was published last year by BlueSquare Games – squee! – called Trains, Planes, and Automobiles. It’s a cool game, although I know I’m biased.  By the way, fractals look nice, but I’ll never get it.

He’s a former Naval Academy grad and submariner who now works in the computer software/project management field (and that’s all I can tell you without having the free world fall to pieces and being required to shoot myself or something), has played classical piano since elementary school (never mind how long ago that was), and is a fab father to our three boys, who also like to tease dad about his little eccentricities.

Here are a few that stem from his Yankee frugality:

And then there are the times when we’re in the car, and he’s the one driving:  he waits until what feels like the last blessed moment to get into the turn lane. Meanwhile, I’m dying to say something, like “Um, the turn’s coming up, honey, are you going to change lanes now?”  My knuckles turn white, clenching the arm rest, willing myself to stay quiet, but all the while, thinking:  “we’re going to miss the turn, we’re not going to make it, no one will let us in the lane….”  I have to admit, it gives each trip a little zing! of uncertainty.

If he’s feeling particularly generous that day, he’ll give me a little look, and change lanes early.  Happy Birthday, dear. (Maybe he’ll take pity on me this Valentine’s Day).

Speaking of driving, the kids crack up when Paul is backing up the car; he turns his head toward the rear window (where they can see him at ground zero), and makes his “pirate back-up face.”   It’s totally unconscious, but he bares his teeth and scrunches his cheeks in a sort of “Arrr” pirate grimace. (He got new glasses since then, and doesn’t need to scrunch his face anymore. I miss pirate back-up face….)

The boys also like to tease dad about the following:

So that is my dear-heart, frugal, laugh-out-loud man, whom I love with all my being.  I wouldn’t trade a single foible.  And it would be really easy to tell if aliens ever kidnap him and switch him out for a pod growing in the basement.

Hello, this is Paul, husband of K.B. Owen. I should start by making absolutely clear that I love my wife with all my heart, and nothing she can do will sway me from my eternal devotion to her, heart and soul. (K: Isn’t he just the cutest thing?)

That said, I understand that I am free to share with the Internet World a few observations that I have made regarding the customary behavior of my Beloved that some might consider … idiosyncratic.  Only a few things come to mind.

First, my darling Sweetheart has a propensity for always finding a better way to arrange and store things that we as a family all need to be able to find every day.  The best example is the kitchen.  Whenever I go to look for, say, a coffee cup, I go to the cupboard where I remember that we said we would put them … “oh, wait, that was where they were last fall.  I remember now, she moved them over here by the refrigerator. … No, wait, that was around Christmas time.  I think they’re … Kathy, where are the coffee cups now?”  I kid you not, this happens several times a week.  “Don’t you remember, Paul?  I told you two weeks ago that I moved the coffee cups over by the microwave.”  “Oh, yes, you moved them [with a certain pained emphasis to imply, ‘for no earthly reason that I can imagine’].  Of course you told me.  Of course I remember.”  The problem is that’s not the first thing I remember when I think of where to look for a coffee cup.  Truth is, it’s about the eighth candidate on the list of possible places the coffee cups could be today. (K: Hmm…I haven’t rearranged anything in a while. That gives me an idea….) 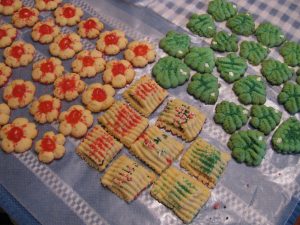 Second, the delight of my heart bakes Christmas cookies, dozens upon dozens, in a major evolution that spans weeks and dominates the kitchen and dining room and fills the house with the irresistable aroma of baking, only to forbid upon penalty of death and severed fingers that anybody should so much as touch one of them.  “They’re for the neighbors/friends / homeless people / strangers in the bayou.  You can’t touch them.  Here, have this one; it’s burnt/broken/ otherwise defective and therefore unpresentable outside the family whom I don’t have to impress.”  So we all, our three sons and myself, swoon over the odors of Christmas cookies, drool over the sight of them on their cooling racks, and console ourselves with the notion that at some point on Christmas day, after all the neighbors, friends, and vagrants have been satisfied, we’ll have our crack at whatever small fraction of the baked manifestation of our wife and mother’s love remains in the house in the form of leftover Christmas cookies.

(K: I now bake “decoy” cookies to keep the hungry horde away from the more time-intensive Christmas cookies…hey, I’m not without a heart….)

Third, I have learned never to maintain hope that our home will be rodent-free.  For as long as I can remember, our house has had some kind of terrarium or cage (or two or three), and within them some form of cute, fuzzy hamster, gerbil, Guinea pig, or even rabbit running on its wheel or in its ball or around its cage.  Over the years, I found that no sooner would I have buried some poor beastie (K: after it has languished in a paper bag in the freezer for a few months) in the woods behind our house than the next day I would come home from work greeted by my darling wife’s latest find at the pet store, some new little creature twitching its whiskers at me as if to say, “Aren’t I cute?  Don’t you just love me?  Won’t you feed me for the rest of my fuzzy little captive life?” Oh, for crying out loud. (No more rodents…we now have a cat. Hubby pretends he grudgingly accepts her. Yeah, right–he’s not fooling anyone. *wink*) 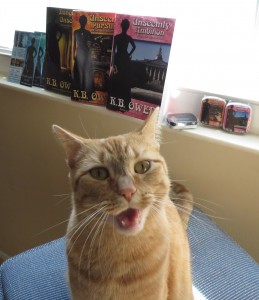 So, there you have it – wife and hubby, dishing on each other’s “foibles.”

What foibles do you live with on behalf of your beloved?  We’d love to hear from you!  Come on, give us the good stuff!

(Here’s a pic of us celebrating our 26th anniversary in Bermuda!) 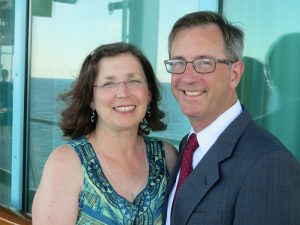 15 thoughts on “My funny Valentine”