How far back do we need to go to find the first detective novel?  There are lots of examples of early stories from cultures around the world.  My post on Judge Dee, for example, discusses how Van Gulik based his work on fictional stories from the Ming Dynasty about magistrate Gong An.

But in terms of novel-length detective fiction, we must turn to mid-19th century England to find the first one.  Why?  Because that’s when England had an official police force.  If you think about it, one can’t be ready for detective novels until real-life detective police are a fixture in your society.  Check out my post last Friday on the Metropolitan Police Act of 1829, for more information about the origins of the police. 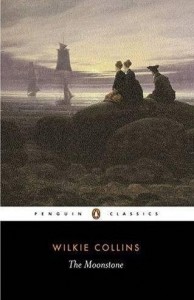 One of the first detective novels in English:

Wilkie Collins’ The Moonstone stands out as the best early (scholars disagree about it being the absolute first) example of a modern detective novel.  Poet and literary critic T.S. Eliot called it “The first and greatest of English detective novels.”

It first came out in serialized form:  32 installments, published between January and August 1868.  In America, Harper’s published it.  In Britain, it was published in Charles Dickens’ magazine All the Year Round, and its popularity increased circulation more effectively than Dickens’s own Great Expectations.

I cannot begin to imagine the challenge of writing a novel in installments, especially a mystery; one cannot go back and change or add anything in the way of clues, or correct mistakes.  And to compound the challenge for Collins, he suffered an acute attack of rheumatic gout while working on the novel, the pain of which he attempted to relieve by heavy doses of opium.  Not surprisingly, opium figures prominently in the final sections of the novel.  Despite writing it under opium, the novel is carefully constructed and balanced – probably because he always planned out his novels before writing them, and then filled in the minor details of incident and touches of character development at the time of writing for publication.

The rising middle-class formed the core demographic of readers during the period (oddly, the aristocracy didn’t read popular literature all that much).  Victorian readers had certain expectations, however, that Collins had to be careful to meet:

Most of the exotic details in the novel were new to Victorian readers, although India itself was frequently before them in the newspapers, and many people had friends and relatives over there (connected with the Army, the East India Company, and the Foreign Service).  At the time of the novel’s serialization, India had been under Crown rule for nearly ten years.  Peace had been maintained throughout the 1860s, except for some local incidents.

But few Victorians could forget the Indian Mutiny of 1857, which is the incident the novel is referring to in its prologue, and other atrocities committed on English women and children at Cawnpore and Lucknow.  It made no difference to the vast majority of Collins’s readers that British policy in India had planted the seeds of the Mutiny, or that the subsequent British reprisals were as brutal as the original rebellions.  The Indians had been firmly established in Victorian minds as an alien, mysterious, and potentially violent people.

One of the sources Collins consulted for information on Hinduism, the Encyclopaedia Brittanica, describes Hindustan in this way:

“The Inhabitants of Hindustan rank much lower in the scale of civilization than the nations of Europe. They are far behind them in literature, science, and the arts, and in all the civil institutions of society; and their religion is that of a rude people, consisting in an endless detail of troublesome ceremonies, which are deeply interwoven with the whole system of life.”

So it is no surprise that Collins’ Indian characters possess many of the stereotypical features of the time:  they are alien, sinister figures, producing distrust and fear, and single-mindedly ruthless in their pursuit of the diamond.  However, the author doesn’t portray them as monsters, for he also shows them to be faithful priests who are willing to sacrifice their lives and caste to their religious mission.  And Collins has some really disagreeable low-lifes among the English characters, who make the Indians seem noble by comparison.

In The Moonstone, there are also echoes of the famous Road Murder Case of 1860, in which 16yr old Constance Kent murdered her 4yr old stepbrother.  Collins used parts of the investigation which readers would recognize:  there was a blood-stained nightgown as the incriminating piece of evidence (which Constance burned in her bedroom), and a hot-shot detective from Scotland Yard, Inspector Whicher (Sgt. Cuff in The Moonstone was modeled after him to some degree), who was summoned after the local police failed.

Collins made his detective a man distinctive in both appearance and habits.  Collins recognized this as a necessity, and we still adhere to it in our fictional detectives today.  The detective is a “threshold figure” of sorts, who straddles many sorts of opposites:  crime and law, mystery and discovery, confusion and order, the public and the private.  As a result, he/she doesn’t quite fit in with either world.  Collins made his detective, Sergeant Cuff, a brilliant and unconventional thinker, with an unusual hobby for one who deals regularly with crime and the dark side of human nature: he grows roses.  Not casually, mind you: he is an expert.  Sergeant Cuff also possesses distinctive traits in manner and appearance:

“His face was as sharp as a hatchet, and the skin of it was as yellow and dry and withered as an autumn leaf.  His eyes, of a steely light grey, had a very disconcerting trick, when they encountered your eyes, of looking as it they expected something more from uou than you were aware of yourself.  His walk was soft; his voice was melancholy; his long lanky fingers were hooked like claws.  He might have been a parson, or an undertaker – or anything else you like, except what  he really was.”

In 1997, Masterpiece Theatre aired The Moonstone, starring Greg Wise and Keeley Hawes.  It’s an excellent production of the novel, and worth a watch.  Here’s a clip of the first 10 minutes:

I hope you’ll give The Moonstone a try!

What detective novel do you consider a classic, one that sets the standard for others to follow?  I’d love to hear from you.