Show Me the Money: 19thc bank robbers and counterfeiters

While I’m bouncing back from my previous week of R&R (hint: fridge re-stocking and massive laundry are involved), here’s a re-post about bank robbers and counterfeiters in the 19th century that you may find interesting.  Enjoy!

Some 19th century criminals weren’t as smooth and polished as the “Sting” style con-men (and women), or the stealthy shoplifters and get-rich-quick schemers.

These criminals took a more direct approach, either going right to the source –  the bank – or skipping the bank and printing their own money.

It was a different sort of “skill set,” if you will, than that of the suave, quick-witted con-artist.

Billy the Kid (not the one you think) 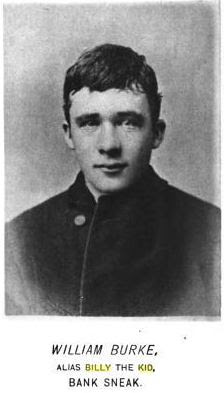 Source for above: Professional Criminals of America, vol 3 (1886)

It’s easy to see from the above picture how Billy Burke got his “kid” appellation; I’ve got socks older-looking than he is.  The Old West gunfighting Billy the Kid with whom we’re all familiar, Henry McCarty, was born a year after Burke, in 1859. Although nearly the same age, the two inhabited different worlds, with Burke being a city boy and McCarty a ranch-hand.

The chronicle accompanying the photo calls Burke the “nerviest bank sneak in the profession.”  He typically worked with a couple of accomplices: one to distract the bank teller (asking for change, or whatnot) and one to drive the getaway vehicle (“carriage” doesn’t sound very fast, but hey, you work with what you have).  While the bank teller had the safe open and was busy getting change for Burke’s accomplice, Burke would run in, grab stacks of money from the safe, and escape with his accomplices.  He was caught a number of times (once he took off his clothes and hid under a woman’s bed in a nearby house), and was in and out of prisons in cities throughout the country, with a long line of warrants waiting for his release from whatever prison he was in at the time.  Strangely, sometimes he would manage to get released on bail; and then of course would promptly jump bail and take up bank robbing in another part of the country, until he was caught again.  Not a great candidate for rehabilitation. 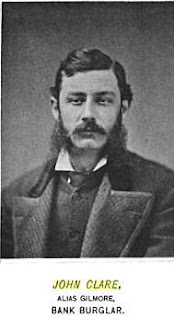 Ever read Conan Doyle’s “The Red-Headed League”?  If so, you have an idea of Clare’s best-known bank robbery attempt.  In June of 1874, Clare purchased a drinking and billiard saloon which adjoined the New York Savings Bank, on the corner of Eighth Ave and Fourteenth St.  Over the following two months, it seemed business as usual while Clare and his confederates broke through basement walls and removed bricks.

Finally, two officers on the beat heard muffled hammering and correctly surmised that the bank vault was being broken into.  They summoned more policemen and surrounded the building.  Upon capturing the gang, the police found that the robbers had been very close to succeeding, having made it through to the outer wall of the vault. Clare, the ringleader, managed to escape during the commotion, and eluded the authorities for nearly two years before he was caught and sentenced to four years and six months in the New York state prison.  Two good sources for this incident: NYT, March 28, 1896: “Capture of a Bank Robber” and Professional Criminals of America, vol 3, 1886 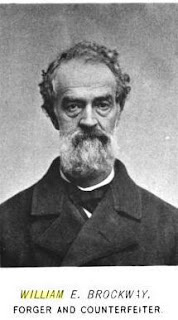 Brockway is the most famous of all the 19thc counterfeiters, as his career lasted 50 years, and many of his counterfeit bills were difficult for even experts to spot.  He was an engraver by profession, and had studied chemistry at Yale, which provided him with important skills in electrolysis (referred to as “electroptyping” at the time) – the transfer of images to metal plates.  The description in Professional Criminals of America states:  “An account of all his transactions would fill this book.” (98).  Even when he was caught, there were times when he could turn things his way, such as the immunity deal he made with the U.S. government:

There were other times, of course, when Brockway actually served jail time.  Despite such setbacks, Brockway lived and died a wealthy man.

To learn more about Brockway, check out The American Numismatic Society‘s page, and the following NYT articles about a later case against him:

So, who ya gonna call?

The Secret Service, originally a division of the Department of the Treasury, was formed in 1865 for the express purpose of cracking down on counterfeiters.  At the end of the Civil War, one-third of printed money was counterfeit.  It wasn’t until 1901, after President McKinley’s assassination, that the Secret Service took on the additional mission of protecting the President.  Ironically, the signed paperwork creating the agency was on Abraham Lincoln’s desk the night he was assassinated.

Before 1862, banks printed their own money, so it was relatively easy for counterfeiters to make forgeries, when so many different bills were circulating.  The Legal Tender Act of 1862 was the first time there would be federal standard-issue “greenbacks” taking the place of individual bank currency.  Even so, counterfeiters kept the agents hopping, as Brockway’s bio reveals.  Agents kept detailed records, including mug shots, of known counterfeiters, and tracked them closely:

If one judges only by comparing the fates of William Brockway, counterfeiter, and William P. Wood, the first chief of the Secret Service (who arrested Brockway and others), then unfortunately, yes.  Brockway lived a comfortable life and, as mentioned above, died a wealthy man; Wood, on the other hand, died penniless, and did not have a proper headstone until Secret Service agents dedicated one in 2001, almost 100 years after his death. 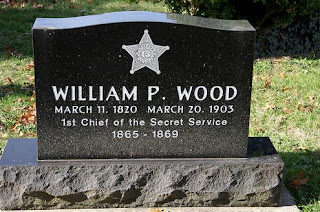 So, how do you think the crooks of today compare to these guys?  I’d love to hear from you!

12 thoughts on “Show Me the Money: 19thc bank robbers and counterfeiters”