View from an armchair: Miss Banning 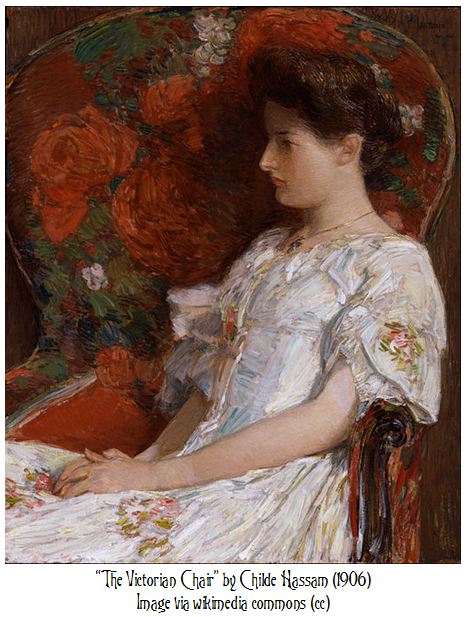 Welcome to the first of a series of character sketches, based upon the people who live in the world of Dangerous and Unseemly, my debut mystery novel.  Each post will provide a particular character’s “view from an armchair,” a unique look into that character as he or she sits in a favorite spot to read, sew, converse, or just mull things over.

Since Dangerous and Unseemly is set at a fictitious women’s college in 1890s Hartford, Connecticut, you can expect several female academics to make their appearance here.  However, society matrons, dashing gentlemen, errand boys, and cantankerous old ladies will come through, too.

Welcome to Miss Banning’s parlor.  Here in her favorite room is her most comfortable, padded chair.  She’s an elderly lady plagued by rheumatics, so she spends a good deal of her time in it.

The arm rests are upholstered in a vague shade of olive, once darker and more fashionable perhaps twenty years ago.  They are faded and threadbare now.   She has covered the arms in crocheted lace doilies to save on wear, but that doesn’t halt the inevitable passage of time.  Edges will still fray and lose their sheen, and stuffing will still erupt from whatever breach it can find.  The ten cats she keeps don’t help, either.

There they are, the cats, about four or five of them right now, dozing by the toasty hearth.  She likes to look at them sleeping, their fluffy bellies rising and falling in contentment.  Her favorite is a large orange tabby she’s named Caesar.  It’s an apt name for the cat to have and the owner to bestow, since Margaret Banning has been a history professor at Hartford Women’s College for as long as anyone can remember, and Caesar dominates over all the other cats.  He loves to curl up at the old lady’s feet.

A chance visitor may find the room uncomfortably warm, but it’s perfect for Miss Banning, for she feels the cold most keenly.  She wears more petticoat layers and shawls than is usual – for anyone, really – in an effort to keep warm. 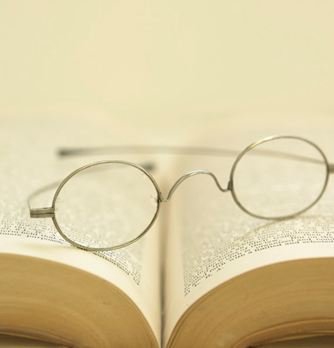 Within arm’s reach are the stack of well-worn books she’s reading, although she doesn’t need the physical book in order to remember its contents.  That’s probably fortunate, judging by the thickness of her spectacles.  The lenses distort the shape of her eyes, making her look rather owlish.

But Margaret Banning has learnt by heart the writings of the great philosophers and statesmen – Socrates, Locke, Jefferson, Paine, Franklin, and others – and quotes them often, usually in razor-edged retorts directed at her colleagues.

She also makes sure that her cane is within arm’s reach of her chair – her painful joints make it difficult to walk without it.  She enjoys thumping it and poking it at people when emphasizing a point.  This cane is a relatively new one, made of cherry wood in a warm burgundy tint, and she loves the smooth feel of it.  A little brass plate affixed to it reads:  “To Miss Banning, in recognition of her years of service, from the staff at HWC.”  It was given to her when she retired from teaching.  The first time.

Yes, she went back.  She had gotten bored.  She missed the gossip (for she’s a rather nosy lady), the students, and the intellectual stimulation of being at the school.  So she returned to teaching.  No one asked for the cane back.  Not that she would have given it to them, anyway.  But the second time she retired, no one gave her a present.  Which was just as well, because she again changed her mind, and returned to teaching.

Ah, do I hear the rattle of crockery?  Let us leave Miss Banning to her tea.

So, what do you think of Miss Banning?  Do you think she’ll ever retire?  Does she remind you of anyone among your own acquaintances?  I’d love to hear from you.

7 thoughts on “View from an armchair: Miss Banning”

My Love Tweets Before Twitter
Milestones: when your first-born leaves his teen years behind
©2023 K.B. Owen, mystery writer— All Rights Reserved
website by Memphis McKay