According to the National Association for Shoplifting Prevention, retailers lose $13 billion (that’s a 13 with nine zeroes after it!) in merchandise each year.  The time between Thanksgiving and Christmas is prime-time for such thefts, when professional and amateur alike hit the crowded stores.

As soon as the shops become crowded with throngs who go to investigate, admire, and buy their Christmas offerings, shoplifters also turn out en masse. Experience soon teaches them that they can do their most profitable work this season.

For now, let’s set aside discussion of the amateur shoplifters of the 19th century – wealthy and middle class women, mostly, who often had their charges dropped by the store because they came from a prominent family and/or they were diagnosed with kleptomania (by some accounts brought on by something “menstrual”). Our focus today is on the professionals, also known as “hoisters,” or “h’isters.” There were two kinds of hoisters: the clouters and the pennyweighters. To quote one of the policemen in the article: “These people have more ways of stealing than they have fingers and toes.”

Shoplifters such as Flossie Maitland and May Murray (couldn’t find their pics, sorry), worked together as clouters, with one to distract the clerk and the other to wear the apparatus under her skirt. The clouting apparatus consisted of a hidden band around the waist, to which strong elastic bands are attached. The item to be stolen would be dropped on the floor, and the clouter would stand over it (covering it with her skirt), then stoop down as if she was picking up a hairpin, reaching under her skirts to secure the item beneath the criss-crossed elastic.

The Sun article describes May Murray as “‘Big May,’ the most notorious shoplifter in the country.” Policemen in every city had heard of her. When she was caught in New York (after being followed in and out of several stores by police in a nearby cab), they found a 42-inch sealskin coat hidden under her skirt, and two other fur coats beneath the cab seat from the stop at the previous store.

Pennyweighters (both male and female) were thieves who would steal an item and replace it with a cheap copy so its disappearance wasn’t quickly noticed. Jewelry was a typical target. The thieves would scope out the jewelry on display ahead of time and create something close in appearance that could be quickly swapped out.

So, without security cameras or metal detectors, what was a Victorian department store owner to do? The common solution was to hire a detective to keep watch, although some stores, such as Lord & Taylor, denied that they even had a problem with shoplifters.

Surprisingly, some of the private detectives were women. Why? According to a female detective interviewed for The Sun article, “they (store managers) found that men were clumsy at following and arresting women shoplifters.”

Here’s a bit more about this particular lady detective, from the reporter’s point of view (he’s referring to himself in the third person):

“Things not being what they seem” certainly makes writing mysteries fun!

Have you ever seen someone shoplift an item? Should we bring back store detectives, as opposed to those metal detectors that go off for no good reason when you’re trying to leave the store? I’d love to hear from you.

Dangerous and Unseemly (book 1 of the Concordia Wells Mysteries) is now available in audiobook form! 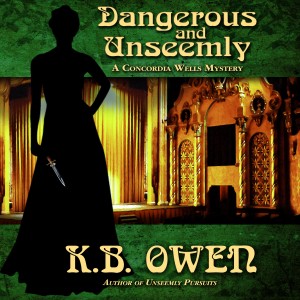 Produced and Narrated by Becket Royce

To celebrate the event (and in the Christmas spirit of giving), I’m giving away audiobook copies of Dangerous and Unseemly to the first TEN people to tell me in the comments that they want one! Be sure to include your email address so I can send you the code.

Thanks, and Merry Christmas!