Kassandra Lamb is a retired psychotherapist and psychology professor who now writes mysteries. I’m honored to have this fab gal as my guest here today!  She’s celebrating the release of her 5th novel by doing a “Tour of Fives” around the blogosphere.

So today she brings us…

Five Reasons I Have Come to Appreciate History

In high school, I was placed in Honors American History. I hated it! We were going over the same boring stuff I’d been learning since first grade, except now I had tons of homework every night. I badgered my mother until she let me transfer to a regular history class. I was still bored but at least I didn’t have all that homework.

With age comes wisdom and I have since grown to appreciate history. Why? I’ll give you five reasons.

1.  I’ve now lived a good bit of it!  I was 11 years old when JFK was assassinated. I had just turned 12 when the first bra-burning launched the women’s liberation movement. I was 16 when Martin Luther King, Jr. was killed. I was involved in the Civil Rights movement and lived through the Vietnam War era.

When you’ve actually experienced events that those a decade or so younger have only heard about in history class… well, it changes your perspective some.

2.  I love finding out how people dealt with everyday life before the invention of modern conveniences. Before vacuum cleaners, women hung their rugs on a metal rack and beat on them with wooden or metal contraptions to get the dirt out.

And then there is the fascinating concept of the “water closet.” Sir John Harington came up with the idea originally in the 1500’s but it didn’t really become popular until plumber Thomas Crapper fine-tuned the design in 1880 (yeah, that really was his name; see Kathy’s post on the subject). How totally clever! A container of water, a lever and a chain to pull the stopper up and down, plus gravity and voila, no more trips to the outhouse.

3.  I find the changing trends in society fascinating. A few years ago, I was putting together a special topics class on relationships. While doing some research for the unit on families, I discovered that the much touted concept of the “traditional” nuclear family with male breadwinner/female “non-working” housewife was actually a relatively newfangled idea.

Prior to World War II (i.e., my grandmother’s generation and before), the most common family structure was the extended agrarian family, with multiple generations living on the farm. The women milked cows, tended chickens, raised vegetables, etc. as well as their domestic chores. And at certain times of the year, they would be out in the fields alongside the men, as is still the case in most developing countries.

Some poorer folks had moved to towns or cities to find work after the Industrial Revolution. In these families, the mother worked or the family starved. At the very least, she took in laundry, sewed and/or cleaned the rich folks’ houses. Even in many middle-class families the wife helped in the family store. Only very well-to-do women had the luxury of not contributing to the family resources.

My parents’ generation was the first one in which couples from the working class and middle class routinely aspired to (1) live in their own house as a nuclear family, and (2) be able to afford for the wife to just be the housekeeper, cook and caretaker of children.

That little waltz down the path of history was a real eye-opener for me! Sometimes the good ole days weren’t as good, nor as old, as they’re portrayed as being.

4.  Sometimes what famous people said makes a lot more sense in context. I need to note here that I don’t normally discuss religion or politics in online settings, but I just couldn’t find another good example of this (that wasn’t political). So here’s my story and I hope it doesn’t offend anyone.

In a Bible study class several summers ago, we were studying Paul’s first letter to the Corinthians, one of the books in the New Testament. I secretly had always thought Paul was a prude because he went on and on about “matters of the flesh.” While studying 1st Corinthians in the context of when, why and to whom it was written, I found out two things.

One, the city of Corinth had a very bad reputation. Idol worshiping and drunken debauchery were rampant. Thus Paul felt the need to remind the Christians in Corinth to behave themselves.

Secondly, there was a huge debate in the early church as to whether gentiles had to follow the Jewish laws if they became Christians. Some contended that gentile men needed to be circumcised before they were baptized. This tended to cause second thoughts about conversion. Some of Paul’s rants at the Corinthian Christians about their focus on “matters of the flesh” were to get them to stop insisting on circumcision. They were chasing off converts.

Which brings us to…

5.  Sigmund Freud.  Although he wasn’t the first psychologist, he’s the one who put the field on the map. Today he is often accused of being a woman hater who was obsessed with sex. He was neither. (He was sexist, but no more so than anyone else in his era.)

When I started teaching college I had to study the history of the field more carefully, in order to teach it to my students. I realized that some of Freud’s theories made more sense in the context of that history.

He started out as a neurologist. One disorder he saw a lot of was hysteria (more common in his day; it’s called conversion disorder today). Freud was fascinated with this disorder and eventually specialized in it. He postulated, correctly by the way, that the physical symptoms–numbness, deafness, paralysis, etc.–were not caused by neurological problems but rather by unconscious psychological conflicts.

Several other specialists of his era shared this belief. One of them, Pierre Janet, noted that many women suffering from hysteria reported dreams and flashbacks that indicated they had been sexually abused (again, I hope I don’t offend anybody, but this is reality).

Freud, however, misinterpreted these dreams/flashbacks reported by his hysteria patients as “wish-fulfillment fantasies” that were natural to all children (Ick!) and he developed his theory of child development around that assumption.

Today we may laugh, or cringe, at his theory that all little boys fear their daddies will cut off their wee-wees as retaliation for their lewd thoughts (castration fear) and that little girls play with dolls and want to have babies as a symbolic substitution for what they really want (penis envy). But when you put his theories in the context of the patient population he worked with, it makes a bit more sense how Freud sometimes went down the wrong path.

I’m now inclined to cut him some slack. He got a lot of things right, such as the existence of the unconscious mind and defense mechanisms. Yes, the things he got wrong seem so ludicrous, but that is by today’s standards.

How about you? What is it that fascinates you most about history?  Let me know in the comments section!

Thanks, Kass!  You know how much we dig these interesting nuggets of history around here.  Really cool. 🙂

Let me tell you about Kassandra’s new release, Collateral Casualties, the fifth book in her Kate Huntington mystery series (which reads wonderfully as a stand-alone, too): 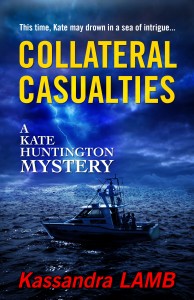 When a former client reaches out to psychotherapist Kate Huntington and reveals a foreign diplomat’s dark secret, then dies of ‘natural causes’ just days later, Kate isn’t sure what to think. Was the man delusional or is she now privy to dangerous information?

Soon she discovers her client was totally sane… and he was murdered. Someone is now trying to eliminate her, and anyone and everyone she might have told. Forced into hiding, she and her husband, Skip, along with the operatives of his private investigating agency, struggle to stay one step ahead of a ruthless killer. Skip and his P.I. partner are good investigators, but this time they may be in over their heads… and they could all end up drowning in a sea of international intrigue.

Doesn’t that sound like a fun mystery to curl up with on a lazy summer evening?  I’ve had the chance to read an advance copy, and it’s an absorbing read – I didn’t want to set it down!

Where to find Kassandra Lamb:

Kassandra blogs at http://misteriopress.com. You can read and see more about her and her books at http://kassandralamb.com. She also hangs out on Twitter (@KassandraLamb) and Facebook (http://www.facebook.com/kassandralambauthor)

Let’s show her some blog love!