In honor of the upcoming Halloween festivities, let’s take a closer look at how the holiday came to be, and how it was celebrated by some in the late nineteenth century.

Irish immigrants not only brought over 1,001 potato recipes and green beer; they brought their tradition of Samhain (don’t even try to pronounce it), which is Gaelic for “dead people, please don’t wreck our harvest or kill our sheep.”  It marked the end of the harvest season and coincided with All Saints’ Day.  When preparing their feast tables, families would set a place for dead loved ones and tell stories about them (don’t know if the stories were flattering or not).

Even once Christianity had a firm hold on Gaelic culture, people believed that mischievous evil spirits walked on the Eve of All Hallows (Saints)’ Day, so masks were used to “fool” the spirits, or in the case of the Scots, to impersonate deceased loved ones.  When a costume or antic was particularly entertaining, the young people would be given apples, nuts, or small cakes.

At a time of year when daylight was in short supply, fire and light were central features of the celebration.  Bonfires were lit, turnips were hollowed out and a candle put inside (one source I checked says this was considered mischievous, but I couldn’t confirm that).  Once the Irish were established in America and celebrating their homeland traditions, they found that the indigenous pumpkin was much better for carving than turnips.

The celebration was especially important for these folks.  The time of plenty was over; they were bracing themselves for the long winter to come, assessing their harvest stores, hoping they had enough to last them and their livestock until spring.

What drove the Irish to North America: the great potato famine:

Sometimes Nature doesn’t cooperate, no matter how hard one works the land.  That’s one of the reasons so many Irish wound up emigrating to North America.  When the potato blight struck Ireland in 1845, famine became a hard reality, as potatoes were the staple of the rural Irish diet.  Between the blight and British laissez-faire policies instituted once Sir Robert Peel resigned (the Whigs then took over and rescinded the various relief measures that were aiding the Irish), the people of Ireland were literally starving to death, unless disease took them first.

Opportunistic landlords, looking to kick out tenants so they could plow up the little pockets of potato fields that were interfering with their plans for large pasture grazing, offered families passage to Canada (and promised them all sorts of things they didn’t intend to deliver).  The ships came to be called “coffin ships” because of the deplorable conditions – it was a wonder any survived the trip.  From Canada, some Irish crossed into the United States, although it was a lot more difficult to get into the U.S. than British Canada.

For more information, take a look at the History Place (a wonderful resource): Irish Potato Famine

Some Halloween traditions in the 19th century:

Within a few decades of the wave of Irish immigrants to the United States, Halloween celebrations grew more generally popular.

We still have some of the same Halloween rituals today, although others from the 19th century might surprise you.  Take a look at the following October 30, 1892 account from The New York Times, of rituals and what they were supposed to mean:

First we have the nuts-in-the-fire ritual (I can imagine the comments already):

Bobbing for apples was quite popular:

And here’s an interesting game.  If they had video-recorders and internet back then, we’d be seeing it on youtube:

It’s easy to imagine the success of that activity, isn’t it?

Lit candles and threat of burnt eyebrows notwithstanding, Halloween would be pretty tame without mischief, and the 19th century was no exception.  College students were a particularly mischievous segment of the population back then (some things never change), as evidenced by the following November 2, 1887 New York Times article: 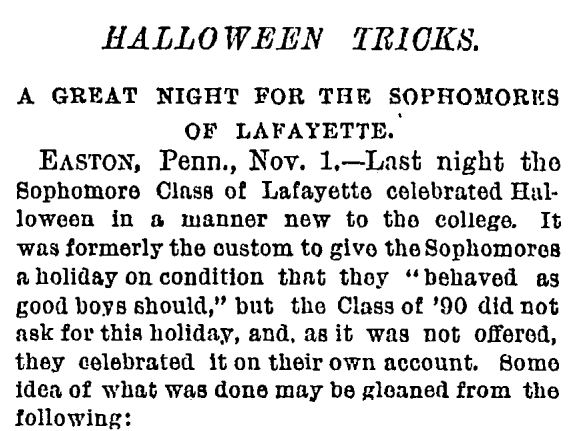 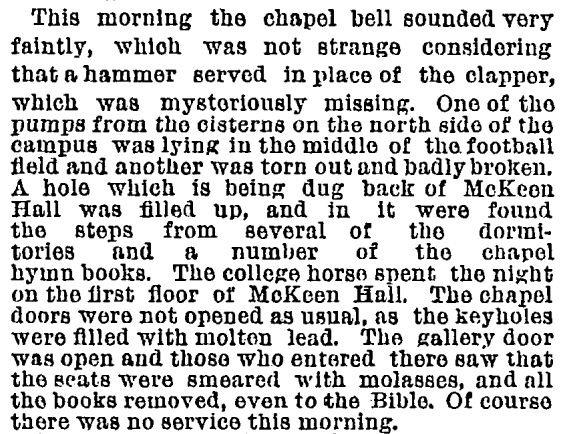 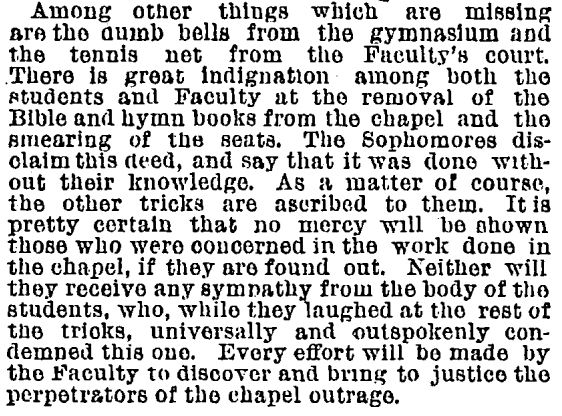 Wow.  I’m still getting over the horse in the Hall.  They were busy.

What are some of your favorite Halloween traditions?  I’d love to hear from you.

23 thoughts on “How was Halloween celebrated in the 19th century?”