Happy Halloween, everyone! In our neck of the woods, the trees are getting really pretty, there’s a nip in the air, and I’m scouring Pinterest for decor ideas and recipes to enhance the Halloween fun here at Casa Owen. Our cat Tora is starting to snuggle on my lap for longer stretches of time as I work at the keyboard. 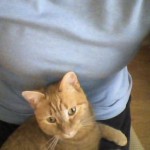 Speaking of cats, Halloween isn’t the only occasion to celebrate this week. Did you know that October 29th is National Cat Day? Of course, as Tora would point out, every day should be cat day. I know, right? Of course, some people may celebrate both occasions by dressing up their cats in Halloween costumes, though I would advise against it:

But there’s more to our beloved felines than their tolerance (or lack thereof) for funny costumes. As history attests, they have gone beyond bringing us live crickets or licking our hair to wake us up in the morning. Cats actually lived aboard U.S. Naval ships in the nineteenth century, and served with sailors and soldiers during the first world war.

Here’s what Wiki has to say about cats “keeping the free world free” during WWI:

Throughout the “war to end all wars,” cats were a common sight in the trenches and aboard ships, where they hunted mice and rats. Beyond their “official” duties, they were also embraced as mascots and pets by the soldiers and sailors with whom they served.

Wow, who knew? Cats served in the Second World War, too. Maybe Cleo threw up in the Nazis’ boots. Serves them right.

Want to read more? Check out these sources:

So if a cat (black or otherwise) crosses your path this Halloween, I’d say it was good luck!

What are your plans this Halloween? Do you have a cat? Do you dress him/her up in a costume? I’d love to hear from you.

…and in case you missed it:

Where my research takes me: 1890s railway travel (and new release!)
Oh, that explains it: she’s a WRITER
©2023 K.B. Owen, mystery writer— All Rights Reserved
website by Memphis McKay