Oh, that explains it: she’s a WRITER

Welcome to Watercooler Wednesday, where the water is above-average, the topics are bubbly, and the company is sparkling. Today’s topic:

Writers and the writing process have been on my mind lately, with National Novel Writing month now upon us. Many of my writer friends are participating, challenging themselves to write 50K words (the length of a short novel) during this time. (I just published a novel and am plotting the next, so the timing didn’t work out for me).

Whether we’re in the midst of speed writing or more sedentary plotting, it’s so easy for us writers to be humming along with our day-to-day lives without realizing that, maybe, we’re not quite normal.

Oh, sure, we joke about working in our pajamas until the kids come home from school, tell stories of coffee shop conversations overheard that we might be able to put to future use, and even wonder if we’re on some NSA watch list because of our web searches (my poor hubby was wringing his hands over my research into 19th century bomb-making, for example, since he has a security clearance).

Check out the rest of Kristen’s post, where you’ll get writer tips on unconventional uses for Febreze, and the upside of natural disasters, among other gems: You Know You’re a Writer When…

But we’re not always aware that this weirdness begins in our own heads. YA author Julie Glover reminded me of this important fact in her funny-but-ouch Facebook post: 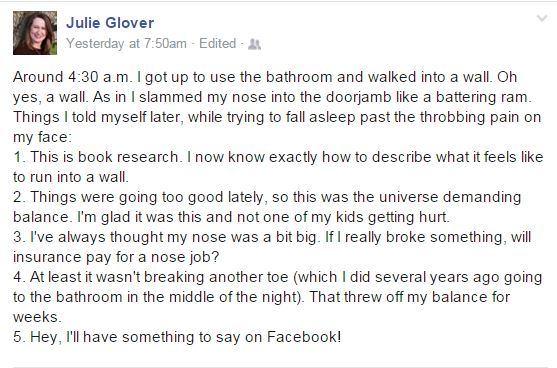 Julie isn’t the only writer to use pain and physical misfortune as fodder for writing. Here’s another tale of woe and oddity from Misterio Press mystery author Kassandra Lamb:

Pretty neat when you can get your spouse to drink the Kool-Aid, too. 😉

Basically, writers make up lies for a living. Sometimes it’s a challenge to extricate ourselves from the worlds of our creation, even when we aren’t in front of the keyboard. 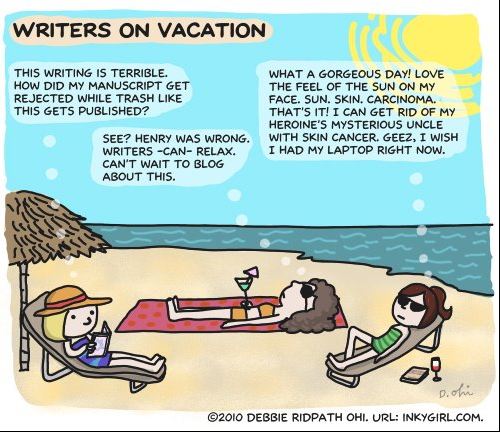 Those scenarios above? All me.

Mystery writer Janice Hamrick certainly danced the fine line between writing and reality (with great hilarity) when trying to break into her own house:

I was in the back yard when my daughter poked her head out the door to let me know she was leaving and by habit (and a very good habit it is) locked the door. Twenty minutes later, I turned the door knob to go inside and found the deadbolt doing the job for which it was designed. My first thought was a fairly standard, “Oh, no!” However, my second was…and I’m not kidding here… “I’ve always wanted to break into a house.”

The top half of my back door has one of those large windows with nine panes, and I had a toolbox on the porch. It seemed like Fate. In a flash of inspiration, I conceived the brilliant idea that I would break through the lower left pane, reach through the gap, and unlock the deadbolt.  I even decided to time myself so I’d know just how long the hapless homeowners had between the first tinkling of shattered glass on the concrete floor and the inevitable brutal entry. Using a pair of sunglasses as eye protection, I placed an old towel over the pane and swung the hammer with a certain amount of trepidation.

It bounced like a superball off a brick wall.

Undaunted, I swung a second time. Once again I achieved only a bounce of the hammer and some seriously undamaged glass.  Mildly annoyed, I dropped the towel, which was obviously  providing too much protection, and tried again. The bounce, if anything, was higher. I gritted my teeth, widened my stance, and narrowed my eyes. Then, I lifted my arm and struck like a snake, assuming a snake had a hammer and the upper body strength of a toddler.

Absolutely nothing. I was pretty sure the door was mocking me.

Completely annoyed, I gripped the hammer with both hands and began pounding with all my might. And finally – triumph! The glass broke.

Sort of.  A single crack ran from the lower left pane all the way to the upper right pane. That’s when I realized that the “panes” were simply slats of wood across a very large single sheet of glass.  I also realized that the repair was now going to be seriously expensive, but I’d already crossed the glass Rubicon so to speak. I hammered away until the glass finally crazed (it was safety glass and there would be no tinkling), and I was able to break out enough pieces to make a hole large enough for my hand.

Only my hand wouldn’t go through. After all that effort, my questing fingers stubbed against a second undamaged pane. Foiled by the curse of double glazing!

Want to know how it ends? Did Janice wander forever in her backyard, living the life of an itinerant writer/camper? Did the neighbors call the police? Did feral cats adopt her as one of their own? Read the rest of the story here.

I want to thank Julie, Kassandra, and Janice for their gracious permission to post their stories here. I’d like to especially thank Janice, because now I won’t be tempted to wreck my own windows to see if I can break into my house. Though I’m thinking, on a nice day, the screen might work….

So, do you think writers are born this way, or are their eccentricities an occupational hazard, like asbestos exposure or fossie jaw? Writers, any experiences you’d like to share? I’d love to hear from you.

Until next time, wave your freak flag proudly!

…and in case anyone missed it: