Swindlers, Thieves and Pickpockets – Oh My! Don’t Walk Through the 19th Century Alone

While I’m off watching my oldest get his diploma (where’s my hankie?), here’s a post from the beginning of the year that you might enjoy.

I’ll be back soon!

The Age of Larceny


Historian Timothy Gilfoyle, in “Street-rats and gutter-snipes: child pickpockets and street culture in New York City, 1850-1900,” (published in Journal of Social History, Summer 2004), says: “the period from 1866 to 1887 might be described as the ‘age of larceny.’ During those two decades, larceny comprised between one-third and one-half of all crimes in New York State.”


This week we’re going to give those coppers a well-deserved break and focus on some of the criminals who gave them so much grief.  Let’s start with the women.

She started early in her life of crime.  Her father was a safe-cracker, her mother a shoplifter, and Sophie carried on the family business.  By one account, she was caught stealing when she was 3, although there’s not enough corroborating evidence to say for sure.  Certainly, she was arrested for shoplifting at age 12, married a fellow pickpocket, Ned Lyons, who later became known as “King of Bank Robbers,” at age 16, and was imprisoned multiple times.   Once, her husband (who had just escaped from prison) managed to disguise himself and break her out of Sing Sing.  After time spent in France, a return to New York, more arrests and near-arrests, Sophie Lyons retired from criminal life and turned benefactor, as described in the New York Times article below (apologies for the poor image quality): 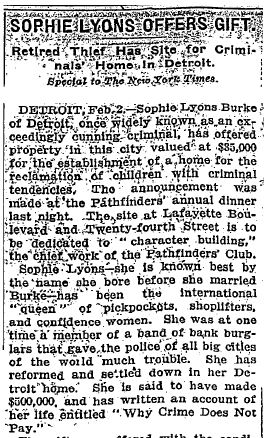 Gotta love the title of her book:  Why Crime Does Not Pay. Nothing could be further from the truth in this case.  At the time, she was worth half a million dollars in real estate alone, and the book, of course, was making money, too.  But I’ll try to keep my cynicism in check.


One last ironic note – here’s an incident near the end of her life.  Call it poetic justice, if you will: 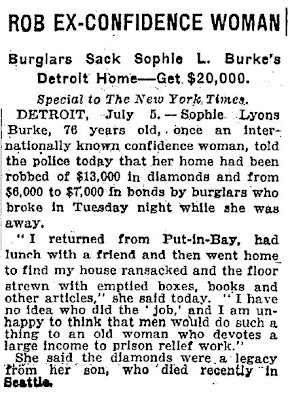 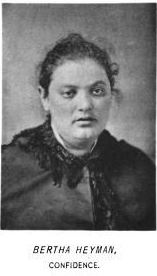 The following account of Bertha Heyman, from an 1886 book Professional Criminals of America, vol. 3, by Thomas Byrnes, describes her best: 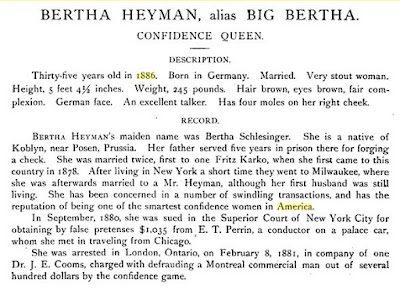 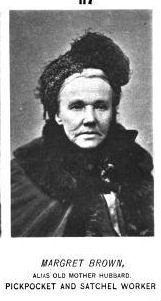 The description below also comes from Professional Criminals of America: 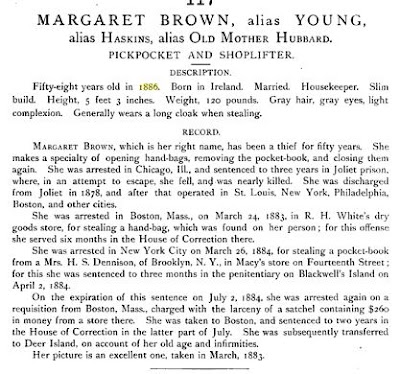 Next week:  more criminals – the men this time – to keep the police busy!  Perhaps, too, we can discuss how male and female crime differed. 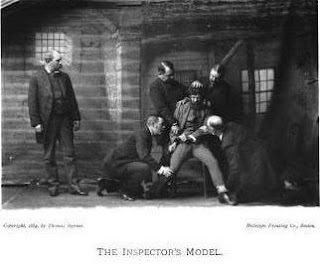 So these days, why does the term “con woman” sound so odd?  What type of woman do you picture if you heard a lady referred to that way?
Thanks for reading,
Kathy

6 thoughts on “Swindlers, Thieves and Pickpockets – Oh My! Don’t Walk Through the 19th Century Alone”