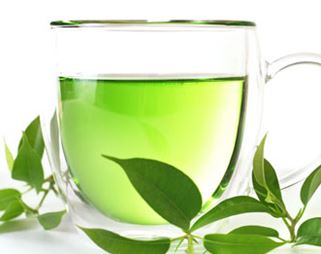 With stories in the news lately about hackers from China breaking into corporate computers and stealing proprietary software and information (for example, this 60 Minutes’ feature: The Great Brain Robbery), here’s a little historical gem about Robert Fortune (1812-1880) who accomplished the reverse. The low-tech version.

From 1845-1848, this Scottish botanist managed to acquire China’s closely-guarded tea-growing and production secrets, along with actual plants to transplant in India. For the tea-drinking world, this was a game-changer. Within a short time, China no longer had a monopoly on tea, and Brits had control over the production of their favorite beverage.

Robert Fortune was working for the Horticultural Society of London and had already traveled to China and learned a great deal about tea production, along with some surprises:
Chinese merchants had been telling their customers for decades that green and black teas came from different plant varieties. Fortune learned that the difference between black and green teas wasn’t the variety of plant, but the method of drying the leaves. He also discovered that the Chinese were dyeing the green tea purchased by the English. 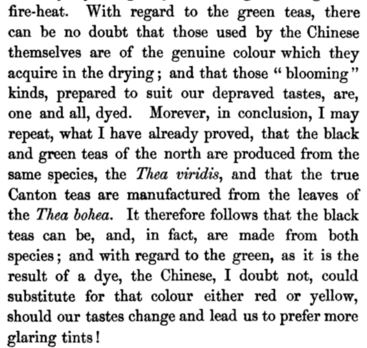 He published his discoveries in book entitled Three Years’ Wanderings in the Provinces of China. It drew the attention of the East India Company, which commissioned him to return to China and acquire tea plants for them. In Fortune’s own words:

I was deputed by the Honourable the Court of the Directors (sic) to proceed to China for the purpose of obtaining the finest varieties of the Tea-plant, as well as native manufacturers and implements, for the Government Tea plantations in the Himalayas.

Fortune had no ethical problem with such a request. In his view, plants belonged to the world for everyone’s use.

The Chinese were incredibly secretive (and rightly so, given what did happen) about how their tea was produced. Fortune spent two and half years in China, shaving his head and adopting the attire of a Chinese merchant (read Sarah Rose’s fascinating book, listed below, for more details). It was sometimes a challenge to evade China’s in-port restrictions, which only allowed foreigners to travel one day’s distance from the ports allowed to Europeans by treaty. But Fortune managed to travel to areas few Europeans ever saw.

Here is Fortune’s own account of how he transported the tea plants he collected, using what was called a glazed case, first devised by Nathaniel Bagshaw Ward: 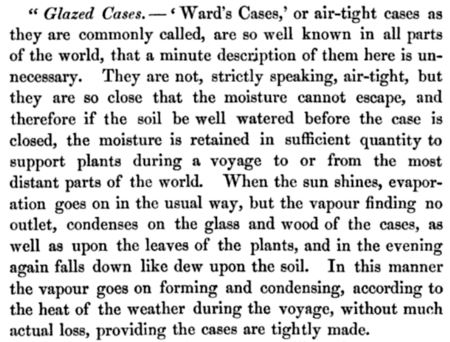 The mission was a rousing success:

Upwards of twenty thousand tea-plants, eight first-rate manufacturers, and a large supply of implements were procured from the finest tea-districts of China, and conveyed in safety to the Himalayas.

Wow, 20,00! And the equipment and experts to successfully start a tea-growing operation in India. Can you imagine?

Fortune, Robert. A Journey to the Tea Countries of China; Including Sung-Lo and the Bohea Hills. London: W. Clowes and Sons, 1852.

P.S. – Be sure to check out the following post for my giveaway and flash fiction fun! Entry deadline is January 31.

4 thoughts on “The Spy Who Stole Tea from China”