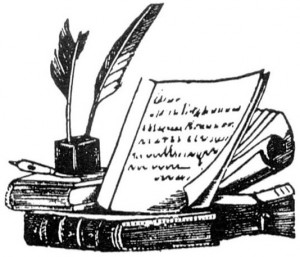 Hi everyone! I’ve decided to start off 2016 with something fun and interactive. You all read my stories (thank you!); now I’d love the chance to read yours.

As you may know, much of my primary research comes from the 19th century newspaper archive, Chronicling America. I often stumble upon fun little gems that I didn’t anticipate.

Here’s the last line from a newspaper article in The Dalles Daily Chronicle (April 4, 1894). Can you write the story preceding it?

If you meet a party of eight young men with a barber pole, don’t arrest them. They own it.

Isn’t that a great ending? What do you think happened before that? Let your imagination run wild.

What will you win?

In addition to the satisfaction of entertaining your audience, each storyteller (up to 30 participants) can select either an ebook from my Concordia Wells mystery series (choose from books 1 through 4), or an audiobook version of book 1 or 2!

So, start creating! This will be open until the end of January, when I will post the original story for your amusement. Those 1890s college kids were a mischievous bunch….

What stories have inspired you lately? I’d love to hear from you.

Is there a Santa Claus? A 19th century answer.
State of the Union as spectator sport
©2023 K.B. Owen, mystery writer— All Rights Reserved
website by Memphis McKay