They wouldn’t want us to skip Thanksgiving

Welcome to Flashback Friday!  Since today is the first Friday in November, it seemed a good time to take a look at our country’s holiday.

Some of you might be asking: “Thanksgiving?  What Thanksgiving?”  – because the stores jumped right from the Halloween decorations to Christmas decorations on November 1st.

Nearly all of us rant at one time or another: “How FAR will those money-grubbing retailers push back Christmas?  Fourth of July?”  (The answer, actually, is that it won’t get pushed back any further than it already is; Halloween is a fairly decent money-maker by itself, and marketers aren’t oblivious to Christmas shopping fatigue.  They shop, too.)

The problem with Thanksgiving, from a retail point of view, is that there aren’t expensive products to sell.  Gold-plated turkeys as Thanksgiving gifts go over like lead balloons, if you’ll pardon the mixed metaphor.  Grocery stores, airlines, gas stations, and toll-booths are the main cash beneficiaries of Turkey Day.

Another problem for retailers is that Thanksgiving is a time of – wait for it – giving Thanks. (Yep, came up with that all by myself, lol).  But it’s not giving thanks for the iPad, salad spinner, or Tonka truck someone saw fit to buy for you.  It’s less tangible than that, and it’s tough to market intangibles.

On October 29, 1897, President MacKinley signed the law that declared the 4th Thursday in November as the national holiday of Thanksgiving.  Keep in mind that only four years earlier, the nation had been plunged into the worst economic depression it had ever seen (the “Panic of ’93”), and was still recovering from.

Here’s the October 30, 1897 NYT article about the signing, with MacKinley’s speech: 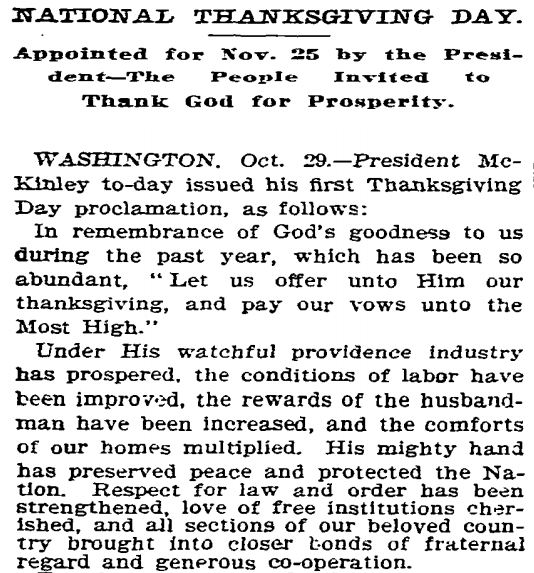 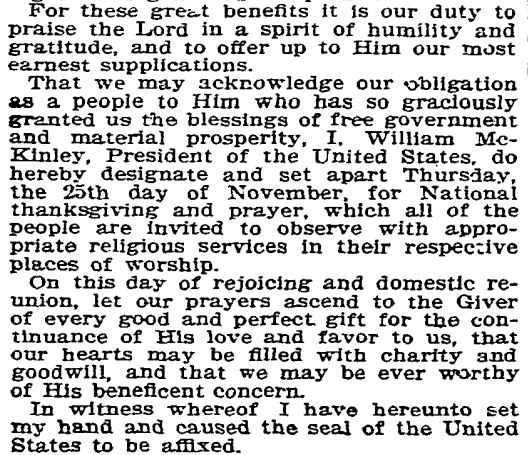 Embracing the intangibles; aka, counting our blessings

Now, 114 years later, what do we give thanks for?  Of course, it varies widely: the delight of hassling the teenager fresh home from college, deflecting the mother-in-law who criticizes our cooking, having a turkey in the oven that we can overcook – all good possibilities.  We also share the blessings of a century ago, including that “free government” thing MacKinley mentioned.

And we know it’s not just a few introspective souls who appreciate these things.  How do we know this?  If you’ve ever been unlucky enough to travel on the Wednesday before Thanksgiving, you’re surrounded by folks who “get” it, too.

Ah, but maybe it’s the food?

Is Mom’s cooking, on that particular day, worth the gridlock on the Garden State Parkway (which certainly lives up to its name at that point), the long airport lines, or the crowded trains?  Doubtful.

Whether we are the travelers or the hosts (yay – the bathroom’s clean!), we know that we crave this experience, of belonging to part of a family/nation/tribe/what-have-you.  And yes, we’re grateful for it, despite traffic hassles, family frictions, or having to eat at the “kiddie” table.

What do you think of retail Thanksgiving blindness?  How do you like to celebrate Thanksgiving?  Any eccentric family members you have to put up with this time of year?  I’d love to hear from you.

24 thoughts on “They wouldn’t want us to skip Thanksgiving”