Happy Autumn, everyone! I’ve been remiss in posting lately, so here we are in another season already.  But with Halloween coming up – one of my favorite holidays – I couldn’t let the blogging fun pass me by.

You know how much I love historical pop culture, so this will be in two parts. Today, we’re looking at the Halloween “tricks” of the 19th century.  Next week, we’ll look at the “treats.”

It’s tempting to think of the 19th century as a time of staid decorum.  However, the young people of the 19th century were a surprisingly mischievous lot.  If toilet paper had been a common household item in the 19th century (check out this post for the reasons why it wasn’t), you can bet the local houses and trees would be littered with the stuff.  Of course, a lot of egging and soaping went on, which even today are tried-and-true pranks.

The culprits seemed to be mostly boys:

Wonder what a “tick-tack” is?  So did I.  I learned it’s a homemade device that creates a tapping sound to make the victim of the prank believe that someone was at the door.  It can be triggered from a distance, with the culprit out of sight.  Here’s a description:

Boys would make “tick-tacks,” cutting notches in the ends of a wooden spool and winding string around it. The spool would be placed right up against a window, with a nail serving as an axle. When the string was pulled, it made a loud and rapid “tick-tack” noise.

Those boys were ingenious little beggars, weren’t they?

Sign-stealing and switching seemed to be a favorite prank, too:

That’s probably a tougher trick to pull off these days, when most signs are digital.  However, some older movie theater marquees and high school announcement boards are still prone to “re-lettering,” even today!

Here’s a creative (and back-breaking) prank that was pulled on one family:

There’s more to the article, but you get the gist of it.  The story ends with some skepticism about how the youths could have managed to move big marble blocks into the yard, especially when it took several burly men to put them back.  I love the mention of screaming school teachers.  What a mental image!

It seemed that boys didn’t quite grow out of Halloween mischief-making once they went off to college, either.  For the tale of the horse in the hall, molasses-smeared chapel pews, and more, check out last year’s post on the subject.

While we’re in “old-fashioned” mode, ever want to make your own candy corn?  I haven’t tried this recipe, but it looks interesting: 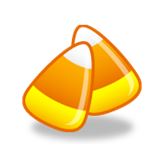 How to Make Homemade Candy Corn

Misterio Press author and former psychologist Kassandra Lamb has a cool post out today about the psychology behind fright-seeking:  Why is Being Scared Out of Our Wits Fun?  Interesting stuff!

Coming this Friday, October 25th, 4-7pm EDT:  for all of you Facebook members out there, please join us for Misterio Press’s Halloween Party!

We’re going to have a blast.  There will be mystery trivia games, pumpkin recipes, digital cocktails, ghost stories, and SWAG!  The Misterio Press authors (including me!) will be giving away free ebook copies of our mysteries, along with mugs, magnets, keychains, and more, as prizes for the puzzles and trivia contests.  Lots of spooky fun – hope you can join us!

Here’s some of the swag I’m planning to give away:

Nothing is to scale, or course, but you get the idea. 😀